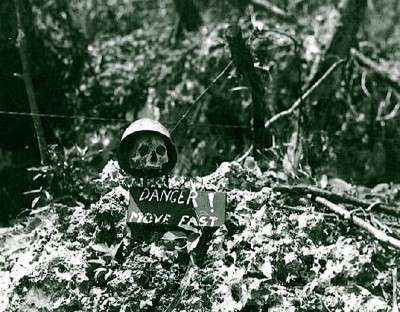 In November of 1944, Japanese forces battled fiercely but continued to lose ground in the war. The detailed World War II timeline below summarizes events in November 1944.

November 3: The Japanese launch more than 9,000 hydrogen balloons with incendiaries attached, sending them on westerly winds to North America. Fewer than 300 of the balloons will reach their targets, but one is found and detonated in Oregon, killing a woman and five children.

November 5: German forces round up 200 Dutch citizens in the town of Heusden. The Germans barricade them inside the town hall and blow up the building, proving that they are as dangerous in retreat as they were on the offensive.

Richard Sorge, a Soviet Union spy who kept Moscow apprised of Japanese war plans before his capture by the Japanese, is hanged in Tokyo.

November 8: The Luftwaffe loses one of its best when ace pilot Major Walter Nowotny crashes his Messerschmitt 262 over Nazi Germany.

November 12: After many efforts to destroy the German battleship Tirpitz, the British finally succeed. Struck by at least two massive bombs, the great ship capsizes and goes under with most of its 1,900-man crew.

November 23: German holdings in the Alsace-Lorraine region of France are further reduced by the Allied capture of Strasbourg, the region's principal city.

Nose art on American military planes and throughout the pages of Life magazine are two subjects covered in the World War II headlines from 1944 below.

Heavy casualties on Peleliu: A helmeted Japanese skull calls attention to a warning sign ("Danger! Move Fast") on the island of Peleliu as the campaign winds down in October 1944. The First Marine Division had landed on Peleliu on September 15, despite indications that the original purpose of the campaign -- to protect General MacArthur's flank in the push to the Philippines -- was no longer necessary. Anticipating only a few days of battle, the Marines found themselves mired in bloody combat amid a maze of coral cliffs and caves. By the time the fighting ended in November, U.S. forces had suffered more than 9,500 casualties in exchange for an island that yielded little strategic benefit.

Tom Lea's graphic paintings for Life magazine: Tom Lea III joined Life magazine as an artist-correspondent in 1940. His wartime paintings included subjects as varied as politicians and battlefield scenes. His graphic images of the fighting on Peleliu Island in 1944 became famous for their realism and horror, which were unlike anything he or any other American war artist had previously depicted. In Two-Thousand Yard Stare, he portrayed, he stated, a Marine "staring stiffly at nothing," whose "mind had crumbled in battle."

Nose art on American bomber and fighter planes: The noses of many American bombers and fighters were decorated with sensual pictures of women. They were often modeled after the images of women in magazines, such as Esquire. Each plane's crew paid a professional or amateur artist, who was often a member of the crew or supporting staff at an air base. Some artists painted images of women that were too graphic for the tastes of commanding officers. In each instance, the crews were ordered to modify the artwork by painting over the offensive figures.

Richard Bong, the "Ace of Aces": USAAF pilot Richard Bong was the leading American ace during the war. In the Southwest Pacific in April 1944, Bong became the first American to pass Eddie Rickenbacker's World War I score of 26. After home leave, Bong returned to the Southwest Pacific in September 1944. Though ordered not to seek combat, he did. His "gallantry and intrepidity" in October and November earned him the Medal of Honor. Eventually reaching a total of 40 victories, the "Ace of Aces" died on August 6, 1945, the day of the Hiroshima bombing, while test-flying the new P-80.

U.S. protects its beachhead on Leyte: The Japanese battleship Yamato comes under bombing attack during the Second Battle of the Philippine Sea. The super-battleship sallied out as part of Operation Sho-1, an elaborate Japa­nese scheme to destroy the American beachhead on Leyte, Philippines. Though a diversion successfully drew away Admiral Bull Halsey's carriers, lack of Japanese airpower doomed Sho. A handful of U.S. destroyers, destroyer escorts, and the few available aircraft from escort carriers narrowly managed to turn the Japanese naval force away from the beachhead. "We had no air cover to repel the enemy, for whom it was pure offensive," observed a Japanese officer.

Attack on the Princeton: Fires burn out of control on the aircraft carrier USS Princeton after a Japanese air attack. More than 60 land-based Japanese bombers and torpedo planes, escorted by 130 fighters, attacked U.S. naval forces covering the Leyte landings on October 24. Though these Japanese forces were decimated by U.S. fighters, one dive-bomber hit the Princeton with a 550-pound bomb that pene­trated the flight deck. The crew abandoned ship as burning gasoline spread to parked aircraft and a munitions storage area. Damage-control parties remained to fight the conflagration, but hours later a massive explosion tore through the carrier, killing or wounding almost everyone still aboard.

See the next section for a detailed World War II timeline of events in late November 1944, including Canada's decision to join the Allied forces.