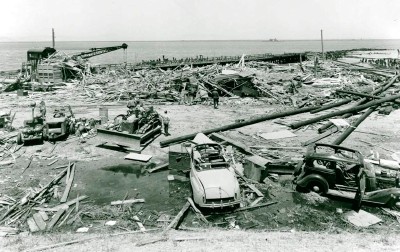 Allied victories in Japan forced Japan's top military leader, Tojo Hideki, to resign in July of 1944. See the World War II timeline below for more information on important events that occurred during the month July 1944.

July 14: In France, Bastille Day observances feature the public humiliation of French nationals who collaborated with the Nazis.

July 17: German troops are ordered to stand firm as the Red Army crosses into Poland.

German general Erwin Rommel is seriously injured in Normandy when an RAF plane strafes his car, fracturing his skull.

Napalm, the incendiary weapon that will become infamous during the Vietnam War, is used by the U.S. in combat for the first time when Allied planes attack German positions on the ground near St.-Lo.

July 18: The disheartening, bloody Battle of the Hedgerows ends with the U.S. capture of the French town of St.-Lo.

On the heels of a string of military defeats, most recently the fall of Saipan, Tojo Hideki -- the political and military leader of Japan -- is forced to resign.

July 20: Hitler survives an assassination attempt by a member of his own inner circle, Colonel Claus von Stauffenberg. In retaliation, Stauffenberg and many other senior soldiers and officials will be executed.

July 21: U.S. Marine and Army divisions retake the island of Guam. Originally ceded to the U.S. by Spain in 1898, Guam was captured by the Japanese in 1941.

July 23: A Red Cross visit to the Nazis' Theresienstadt labor camp results in a favorable report due to a beautification program and a tightly controlled tour. The deportations to Auschwitz-Birkenau will resume shortly after the conclusion of the Red Cross visit.

Find out more information on the man who tried to assassinate Hitler in the World War II headlines from late July 1944 below.

The Port Chicago explosion: At 10:18 p.m. on July 17, 1944, an explosion rocked the Port Chicago Naval Magazine in Concord, California. Black naval workers, untrained on how to handle munitions, had just finished loading more than 4,000 tons of explosives on the merchant ship E. A. Bryan. The blast killed 320 men and injured about 400. Three weeks after the explosion, 258 African Americans refused to return to work, protesting the dangerous conditions and the Navy's segregation policy. Two hundred and eight received bad-conduct discharges, and 50 were found guilty of mutiny and sentenced to prison. Those 50 received clemency in 1946.

Allied bombers clear St.-Lo: Beyond Normandy's beaches, Allied tanks and infantry had to navigate narrow roads and hedgerows (matted earthen embankments hundreds of years old that divided the countryside into small fields). Each well-protected road and field became a deathtrap, and German defenses at the crossroads town of St.-Lo, France, blocked access to more open countryside. After hundreds of air strikes on St.-Lo by American and British bombers, U.S. forces fought their way into the almost totally devastated town on July 18.

Hitler's would-be assassin: Claus Schenk von Stauffenberg's family and acquaintances included many who resisted Nazi rule. Stauffenberg chose a military career, but Operation Barbarossa and the mass murders at Auschwitz convinced him that Hitler must be stopped. After several aborted assassination attempts, Colonel Stauffenberg, on July 20, 1944, placed a briefcase of timed explosives beneath the table in Hitler's conference room, then left on a pretext. Convinced that Hitler had died in the blast, Stauffenberg flew to Berlin to organize a military coup against Nazi leaders. But Hitler was alive, and late on July 20 Stauffenberg was shot.

The Fuhrer vows revenge for assassination attempt: After the failed assassination attempt, Hitler's wounds were slight, although four men had been killed and others hurt. Historians speculate that someone moved the briefcase after Stauffenberg left, and that a massive wooden table leg had protected Hitler from the blast. A raging Fuhrer had his Gestapo round up current suspects, various old adversaries, and their relatives. Hitler ordered some 5,000 people arrested, many tortured, and about 200 executed.

See the next page for a detailed timeline of World War II events in July and August 1944, including information on the fate of Hitler's conspirators.

Once in power, the Nazis encountered some continuing levels of opposition within Nazi Germany. This opposition developed into a resistance movement in 1938 and eventually evolved into a sophisticated conspiracy.

One such resistance group was Weisse Rose (White Rose) -- an organization of students at the University of Munich. It was discovered and crushed in 1943, with about 80 arrests and the execution of three of its leaders, Christoph Probst and Hans and Sophie Scholl. Although two attempts on Hitler's life were carried out by army officers in 1943, the most significant attack occurred on July 20, 1944.

That morning, Colonel Claus Schenk von Stauffenberg secreted a powerful time bomb in the conference room of the Fuhrer's headquarters at Rastenburg, East Prussia. This plot involved many senior Wehr­macht officers, diplomats, and former political leaders, who had planned not only Hitler's death but also to remove the Nazi government. Although the bomb exploded with devastating effect, killing four and wounding many, Hitler avoided serious injury. Hitler's rage and the retribution subsequently inflicted by the Gestapo upon the conspirators, their associates, and many others were ferocious. The key conspirators were tortured and later savagely executed at Plotzensee Prison in Berlin.

About 200 people were executed as a direct result of the July 1944 bomb plot, with many hundreds more consigned to concentration camps. The failure of the July Plot effectively ended any remaining resistance to Hitler, and strengthened the authority of the SS within Nazi Germany.