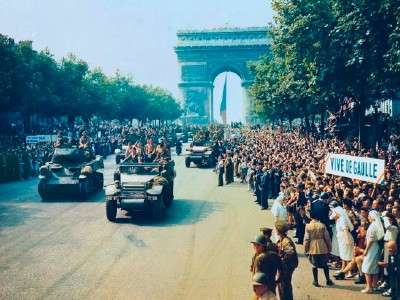 In August and September of 1944, Nazi desperation continued to grow. The detailed World War II timeline below summarizes events in late August 1944.

August 26: On the Fuhrer's orders, German forces begin their withdrawal from Greece.

Operating under the influence of the recently issued "lynch law" order, local residents in the German village of Russelsheim assault and murder the crew of a USAAF plane that crashed nearby.

August 30: The Red Army occupies the Romanian capital of Bucharest as well as the valuable oil fields of Ploesti.

September 2: General Eisenhower is forced to order his armies to stop for lack of fuel, giving Nazi Germany an opportunity to fortify its defenses.

The Soviet-Finnish War ends with the cessation of hostilities. A formal armistice will be signed on the 19th.

September 3: The British free the Belgian capital of Brussels from Nazi occupation.

September 5: In one of the quickest capitulations in the history of modern warfare, Bulgaria surrenders less than one day after a Soviet Union declaration of war. Bulgaria will declare war on Nazi Germany on the 7th.

September 6: The decline of the Luftwaffe enables Britain to stop enforcing a blackout for the first time in three years.

September 8: The next generation of V-weapons, the V-2, begin falling on London.

September 10: The mayor of Warsaw asks for Allied assistance as the city's partisans rise up against the Nazis.

Heinrich Himmler issues an order calling for the murders of the families of any deserting German military personnel.

Find information below on President Roosevelt's relationship with Vice President Truman and the French Resistance in these headlines from 1944.

The Roosevelt-Truman relationship: President Franklin Roosevelt chose Harry Truman as his running mate in 1944. Once elected, Truman had little contact with Roosevelt and was not a member of the president's inner circle of confidants who were developing America's end-of-war strategy, including the possible use of an atomic bomb. Roosevelt died 83 days after the start of his fourth term. Truman had to rely on Roosevelt's advisers to help him shape the policy that would lead the world to peace.

Allied forces liberate Paris on August 25, 1944: Parisians cheer as Allied tanks roll past the Arc de Triomphe. On August 25, refusing to destroy the city as Hitler had ordered, German general Dietrich von Choltitz surrendered Paris to General Jacques-Philippe Leclerc and the Free French forces. French Communist Resistance fighters sought to take power, but Gaullist groups jockeyed into that position. French citizens hoped that Americans were bringing food, clothes, and gasoline, which had been in short supply during Nazi rule, but such items were also in short supply among the liberators.

The French Resistance Fighters: The French Resistance included groups of students, Communists, liberals, anarchists, and Roman Catholics. Some organizations took orders from the British SOE (Special Operations Executive), some followed Charles de Gaulle, and others had different agendas, but all were anti-German. When the Allies approached Paris, Resistance cells organized strikes by police and other city workers. They fought skirmishes with German forces even after Choltitz surrendered. About 1,500 Resistance members and other civilians were killed during the fight for liberation.

See the next section for a detailed World War II timeline of events in September 1944, including more information on the liberation of France.