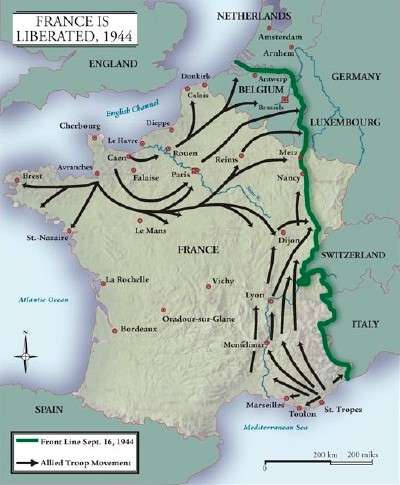 The Allied liberation of France was finally complete in September of 1944. The detailed World War II timeline below summarizes events in September 1944.

Romania formally surrenders to the Allies. It agrees to take up arms against its former Axis partners in exchange for the postwar return of Transylvania to Romanian authority.

September 12-16: Churchill and Roosevelt meet in Quebec to discuss strategy in the Pacific Theater. They agree that a ground invasion of Japan will be necessary for victory.

September 15: One of the most laborious, hard-won battles of the Pacific war begins when the U.S. Marines land on the island of Peleliu. The Japanese will fiercely resist the American invaders for a month.

September 18: The United States and Britain airlift supplies to the Polish resistance in Warsaw. The Soviets, protective of their expansionist aims, are reluctant to prop up any Polish independence movement. The Soviets also refuse landing rights to U.S. and British planes in spite of appeals from Roosevelt and Churchill.

September 19: Female Nazi collaborators in the Dutch town of Nijmegen have their heads shaved and are publicly humiliated.

Churchill returns to Britain following a visit to Roosevelt's home in Hyde Park, New York. In their discussions, the two leaders agreed to fully share atomic research and to use the bomb only by mutual agreement.

September 21: A general strike called in Denmark to protest the deportation of nearly 200 Danes to Nazi concentration camps is violently suppressed by the Germans.

September 22: Patton's Third Army is halted as supply lines are stretched to the breaking point.

Read below for more headlines that occurred in 1944 as the Allies continued on their mission to defeat Nazi Germany.

De Gaulle returns to Paris after Allies liberate the city: French general Charles de Gaulle made a triumphant return to Paris on August 26, 1944. Ignoring sniper fire that sometimes scattered his admirers, the man who had led the Free French from exile in London walked down the Champs Elysees and visited the Cathedrale Notre Dame de Paris. De Gaulle moved back into his old office at the War Ministry and proclaimed the continuation of the Third Republic. He thus derailed an establishment of an Allied military government in France.

The Allied liberation of France: After several weeks of hard fighting among the hedgerows, woodland, and sunken lanes that dominated the post-D-Day Normandy battlefield, the Allied armor at last broke out of the beachheads and drove into France. Allied airpower was a major contributor to this. From July 25, U.S. forces (spearheaded by General Patton's Third Army) launched Operation Cobra, first striking west into Brittany, then south and east toward Paris. Simultaneously, the British Second Army and Canadian First Army struck east, across the Seine and into Belgium. Another Allied army landed in southern France in August. It drove quickly north to achieve a link-up and complete France's liberation.

Enemies still present in Paris after Allied liberation: Parisians who are gathered at the Place de l'Etoile to watch Allied forces march through the Arc de Triomphe had to dive to avoid sniper fire. Resistance forces had engaged in skirmishes with German occupiers for weeks before the liberation of Paris, and fighting within the city was not over yet. Nazi soldiers and French Fascists were still shooting from the rooftops, interrupting celebrations and parades. French police, Resistance forces, and Allied soldiers fought back. The city was secured in a few days and quieted down after about a week.

U.S. Army hangs German civilians who commit crimes: Enemy civilians who committed war crimes were not exempt from American military justice. On November 10, 1944, at Bruchsal Prison near Baden, Germany, the U.S. Army hanged five German noncombatants who murdered six American airmen the previous August. The crew had parachuted safely from their disabled aircraft near Ruesselsheim, only to be waylaid by angry locals. In a small irony, Bruchsal Prison had been favored by the Nazis as a place to guillotine or hang enemies of the state.

Bill Mauldin's popular military cartoons: "More than anyone else, save only Ernie Pyle," Stephen Ambrose wrote in the introduction to a reissue of Bill Mauldin's book, Up Front, "he caught the trials and travails of the GI." Mauldin entered the war as an infantryman in the 45th Division and landed with his unit in Sicily and Italy. He began drawing cartoons in the 45th's newspaper, then transferred in 1944 to the Stars & Stripes, where his cartoons became popular in both the ranks and the States. His characters, Willie and Joe, came to represent the frustrations felt by all American GIs.

Nazi Political art: To Hitler and other Nazi leaders, political art was a means of capturing the spirit of the Nazi Party for those in Germany -- at that time and in the future. "No state," Hitler said, "lasts longer than the documents of its culture." This painting, Auf Heimaturlaub (On Homeland Vacation), portrays a German soldier returning to his home on leave and conveying exciting stories of victory on the front lines. The children pay close attention to their father -- especially the boys, who long for the day they can fight for Nazi Germany.

See the next section for a detailed World War II timeline of events in September and October 1944, including information on an attempt by Jewish captives to revolt against Nazi SS guards.