Browse the article The Ghosts of Gettysburg's Devil's Den 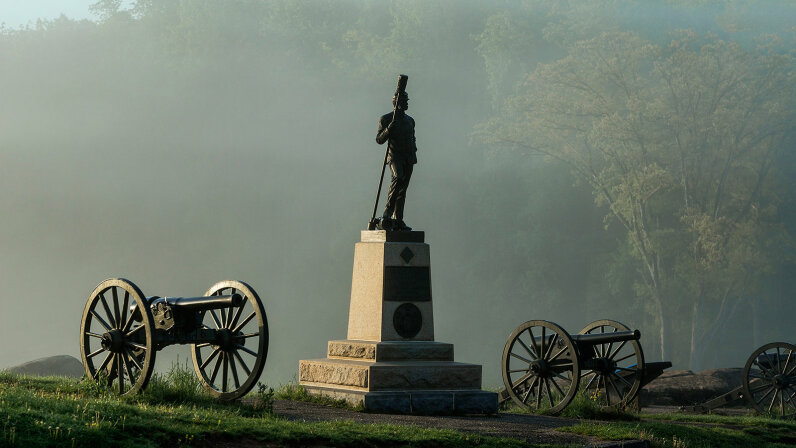 In the summer of 1863, more than 165,000 Union and Confederate troops amassed in the rolling farmland around the 2,400-person town of Gettysburg, Pennsylvania. The battle that took place over three blood-soaked days would claim more than 7,000 lives and tally an astounding 51,112 casualties (dead, wounded or missing).

Although more than 150 years have passed since that epic battle — the bloodiest of the Civil War and a key turning point for the Union cause — the emotional imprint of so much death, suffering and mourning is hard to erase. Some believe that the painful memories seared into the soil and streets of Gettysburg have made it the most haunted town in America.

One particular battlefield site is legendary with ghost hunters and paranormal investigators. Known as Devil's Den, this boulder-strewn maze located between the rocky hills known as Little Roundtop and Big Roundtop was a site of fierce fighting and heavy casualties, and is rumored to be home to several restless Confederate spirits, one of whom hates cameras.

The name Devil's Den predates the Civil War, though the origin is uncertain. Still, it's not hard to imagine why the spooky moniker stuck. Mark Nesbitt worked as a park ranger in the Gettysburg National Military Park before starting a second career as a paranormal investigator and owner of Ghosts of Gettysburg Tours.

Nesbitt says he used to get the "willies" when he had to do security checks on the otherworldly landscape after dark.

"The Devil's Den looks like some giant just dropped these huge boulders the size of houses down onto this one spot on the battlefield," says Nesbitt. "On a sunny day, it's not too bad. On a cloudy day, it's kind of ominous. At night, it's just ridiculous."

The fighting at Devil's Den was intense and dictated by the unusual topography. On the second day of the Battle of Gettysburg, 5,500 Confederate troops attacked the left flank of the Union position on Little Roundtop. To get there, they first had to take Devil's Den, where the maze of boulders made it nearly impossible to see the enemy.

"It would have been scary," says Nesbitt. "You turn a corner and there's somebody with a bayonet."

The turning point of the battle for Devil's Den came with a siege from the Confederate 1st Texas regiment under the command of Major General John Bell Hood. The famously ragtag group of soldiers faced heavy casualties — Hood himself was shot in the arm — but managed to silence three of the Union's four heavy artillery guns and flush the remaining Union soldiers from Devil's Den. Once in position, the 1st Texas installed sharpshooters between the 20-foot (6-meter) boulders to pick off Union officers on Little Roundtop.

Casualties from the fighting at Devil's Den totaled more than 1,800 for the Confederates and more than 800 for the Union. One swampy section of open land between the boulders and Little Roundtop earned the name the "Slaughter Pen" for how many soldiers from both sides were gunned down in crossfire.

The battle for Devil's Den is considered a Confederate victory, although the South would ultimately lose the larger Battle of Gettysburg the next day after the failure of the infamous full-frontal assault known as Pickett's Charge.

Spirits Among the Stones

Tourists visit the Devil's Den battle site at the Gettysburg National Military Park on the 150th anniversary of the historic battle on July 1, 2013 in Gettysburg, Pennsylvania. The Union victory is widely considered the turning point in the American Civil War.
John Moore/Getty Images

Gettysburg is full of ghost stories. Half of the town's original 400 buildings are still in use, including many that doubled as makeshift hospitals and morgues for the tens of thousands of war dead and wounded that flooded the town in the days after the battle. According to residents and visitors, many of these troubled spirits have hung around.

Nesbitt has chronicled hundreds of paranormal tales in his multi-volume "Ghosts of Gettysburg" book series, including several unexplained encounters that occurred at Devil's Den.

One young woman was climbing around the boulders with a friend when she felt a hand grab her ankle. Reaching up from a darkened fissure below was a young man in Civil War uniform. She screamed for her friend, but when she looked back down, the man was gone.

More than one visitor to the Devil's Den has claimed to meet a mysterious figure known to some as the "Helpful Hippy", says Nesbitt. Years ago, a woman told him and his fellow park rangers that she had gotten turned around during an early-morning visit to the rocks when a man appeared behind her seemingly out of nowhere and pointed off in the distance, saying, "What you're looking for is over there." And then he vanished.

When Nesbitt's coworkers asked what the man looked like, she described a disheveled figure in a floppy hat, shoulder-length hair, bare feet and ragged clothing.

"Us park rangers are sitting there going, 'I can't believe she's describing exactly what a Texan looked like at the battle of Gettysburg,'" remembers Nesbitt. "And she wouldn't have known that as a tourist."

Another woman approached Nesbitt at a book signing and said she had a similar experience 20 years later. While exploring the Devil's Den alone, a raggedy man in a floppy hat suddenly appeared and pointed to her University of Texas sweatshirt. "First Texas," he exclaimed, before disappearing as quickly as he came.

Other visitors to Devil's Den and nearby battlefield site have complained that their camera and phone batteries inexplicably fail when in the area, only to start working again when they leave.

One of a series of photographs of a dead Confederate soldier at Devil's Den, that are now thought to have been staged, as the body was photographed in different locations.
Alexander Gardner/Library of Congress

Nesbitt has a theory for the technical glitch, which he himself has experienced more than once. The culprit, Nesbitt believes, is a famous photo taken at Devil's Den of a fallen Confederate soldier lying beside his sharpshooter position.

The well-known image, it was later discovered, was staged. Historians found a numbered sequence of images featuring the same dead soldier in a different location. Some enterprising Civil War photographer saw a photo op and dragged this poor kid 40 yards (36 meters) to pose as a sharpshooter.

"If there's a disgruntled spirit in Devil's Den that has animus toward photographers, it certainly would be this guy," says Nesbitt.

For its part, the American Battlefield Trust, which preserves historic Civil War battle sites, gives little credence to Gettysburg ghost stories. It claims that ghost stories only started circulating in the 1990s when folks realized they could make money off of ghost tours and books.

Now That's Interesting
Nesbitt and others believe that Devil's Den was the site of a major Native American battle centuries before the Civil War, as evidenced by the huge number of arrowheads recovered in the area. Others posit that it was just a popular hunting ground for deer.