by Dave Roos Jan 25, 2019
The Norwegian-Russian border is seen from Skafferhullet, Norway. A fence was built to keep migrants out. While it has little value as a security barrier, it has become something of a tourist attraction. BIL/CCA By-SA-4.0

The United States is far from the first country to ponder the construction of a border wall. Worldwide, there were 15 in 1989; now in 2019, there are at least 77, mostly to keep migrants from crossing borders. England funded a wall in the French port city of Calais to prevent undocumented immigrants from slipping into the Channel Tunnel. India has built fortified, barbed-wire barricades along its borders with Bangladesh and Pakistan. And we hear there's a pretty "great" wall in China.

But if you're looking for the oddest, least-effective investment in border security, check out the 650-foot (200-meter) Norwegian border fence that cost $500,000.

The story of possibly the world's shortest border fence starts back in 2015 when Europe was embroiled in a migrant crisis. More than 1 million refugees, many fleeing war-torn Syria, made the long trek to Europe by boat, train and on foot. Overwhelmed by the humanitarian crisis, European politicians had to quickly decide how to process so many individuals and families seeking asylum.

Norway shares a 121-mile (195-kilometer) border with Russia along the chilly Barents Sea. In 2015, thousands of Syrian, Iraqi and Afghan migrants decided to bypass the dangerous Mediterranean crossing and take the so-called "Arctic route" through Russia to pass into Norway at the northernmost border crossing in Europe.

Around 5,500 refugees entered Norway in 2015 at the Storskog crossing. Oddly, a Russian law forbidding border crossings on foot meant that exhausted refugees had to make the final leg of their journey on children's bicycles.

In total, about 31,000 asylum seekers came to Norway in 2015, and although Scandinavian countries have a reputation for liberal social policies, the sheer number of refugees made some Norwegians uncomfortable. According to a 2015 poll, a third of Norwegians thought that the government should make it more difficult for asylum seekers to gain permanent residency in Norway, and roughly the same number believed that immigrants abused Norway's generous welfare system.

That spurred Norwegian politicians into action. In addition to adopting policies that put tighter restrictions on asylum applications, the federal government in Oslo decided to fortify its border with Russia. This was even though mass migration via this Arctic route had already ended.

In the fall of 2016, Norway erected the aforementioned border fence near the Storskog crossing. Before completion, a portion had to be moved because it was too close to the Russian side of the border. Locals scoffed at the puny chain-link fence, which at 13 feet (4 meters) tall is dwarfed by a Russian fence farther inland that runs the length of the border.

The fence, which has little value as a security barrier, is widely viewed as a symbolic move to show that the Norwegian government is taking a tougher stance on immigration and asylum seekers. And it's gotten a second life as something of a tourist attraction.

Now That Didn't Work
Norway's minister of immigration and integration, who took a hardline stance on refugees, was ridiculed online after she took a quick dip in the Mediterranean Sea (in a bright orange survival suit) to see what it it felt like to be rescued.

Why Gasoline Prices Vary From Station to Station 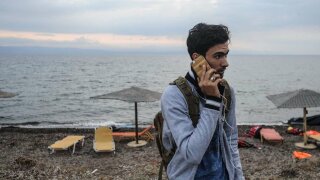 Refugees Survive on Aid and Apps 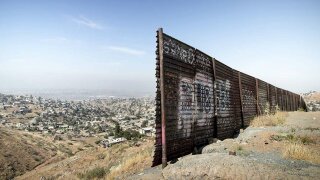 Is Building a Country Border Wall Even Possible?