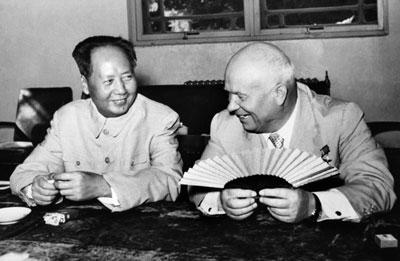 Chairman Mao and former Soviet Premier Nikita Khrushchev during happier times between China and the USSR in 1958.
AFP/Getty Images

After the land grab following World War II, a vast sea of communist red splashed across Eastern Europe, all the way to the Arctic and Pacific Oceans. When China joined the fray after Mao Tse-tung's communist revolution in 1949, Eura­sia was almost completely communist. The USSR's engagement in the Cold War against the U.S. captured the world's attention from 1947 to 1991, when the Soviet Union crumbled. While the tension between the Soviets and Americans never escalated into an armed conflict, the same can't be said for tensions between China and the USSR.

It stands to reason that under communist control, neighboring China and the USSR would get along like the United States and Canada -- bordering nations with a shared vision of government. This wasn't the case.

The two states fought over borders beginning in the 17th century during the reigns of the Romanoff czars and the Ming Dynasty. These tensions continued into the mid-20th century and finally boiled over into armed conflict in the spring of 1969. At the helm were Soviet Premier Leonid Brezhnev and China's Chairman Mao. While 4,500 miles (7,242 km) of the Sino-Soviet border between the nations were under dispute, it was a tiny island in the Ussuri River along ­China's eastern border with the USSR that led to bloodshed.

­The Chinese attacked a Soviet border patrol boat in March 1969, leaving 24 Soviets dead. Throughout the ensuing spring, other armed border skirmishes broke out. One conflict in 1969 left 800 Chinese dead in a battle in which the Soviets unleashed aircraft, tanks and missiles and lost just 60 of their own soldiers [source: American University]. After this undeniable victory, the Soviets issued veiled threats of further violence should any more border disputes arise.

Mao Tse-tung appears to have taken the Soviet threats seriously. That same year, an emergency evacuation­ plan was hatched in the case of a Soviet invasion of China's capital, Beijing. About 60 percent of the population was to run to the hills if the Soviet tanks rolled into town. But what of the other 40 percent? They had another place to hide. Read the next page to find out where. 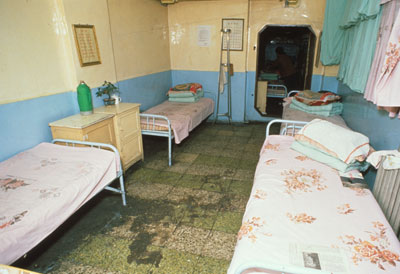