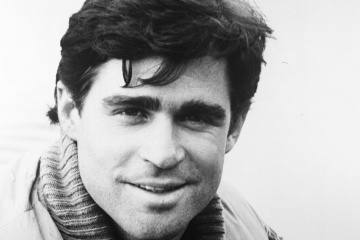 The 1981 film "The Pursuit of D.B. Cooper," starring Treat Williams, is yet one more aspect of the case's enduring legacy.
Universal/Film Favorites/Getty Images

To this day, the D.B. Cooper heist remains America's only unsolved airline hijacking. Though the case faded into obscurity after the initial event, the emergence of prospective clues and new suspects over the years has revived interest and cemented the case's status as a piece of American folklore.

Every year, on the first Saturday after Thanksgiving, you can go to the Ariel Store and Tavern for the D.B. Cooper Days Festival and enter a lookalike contest. The case has spawned songs, like "The Ballad of D.B. Cooper"; movies, like the one starring Treat Williams; countless books, most of which purport to close the case once and for all but do not; dramatizations on TV shows like Unsolved Mysteries; and lots of websites, like n467us.com, citizensleuths.com and Dropzone.com, formerly a recreational skydiving forum that has been mostly taken over by D.B. Cooper aficionados.

On Dropzone you can find all manner of people involved in the case, like Jo Weber and even Larry Carr, who in 2007 became the lead FBI agent on the cold case. Carr posted pseudonymously as "ckret" and challenged the amateur detectives on the site to propose suspects based on profiles he offered, like that Cooper obviously wasn't a big drinker (he'd had only one drink in a high-stress situation) or a chain-smoker, as is frequently reported (eight cigarettes over five hours).

Carr's presence on the Dropzone boards was part of a larger information dump to the public. Previously, the FBI maintained close secrecy over its files on the Cooper case. Carr, whose background is in bank robberies and who was a Cooper enthusiast before he took over the case, opened much of it up to the public in the hopes of generating leads. He also oversaw DNA samples taken from the tie (three people's profiles were found, as were traces of, puzzlingly, pure titanium and impatiens pollen). Like Himmelsbach before him, Carr also thinks Cooper didn't survive the drop.

The D.B. Cooper heist changed American aviation forever. Dan Cooper is the reason we began to all walk through metal detectors and why, in 1973, airlines were given the power to search passengers' bags before they boarded their flights. The death penalty was reinstituted for hijacking that same year. And if you look at the rear of any Boeing 727-100, you will find a white paddle on the plane's exterior. The paddle, which has to be unlatched from the outside, holds the aft staircase locked in place and prevents it from being lowered midair. They call this paddle, a very simple mechanism that arose from a very complicated unsolved mystery, a Cooper vane.

Author's note: How the Hunt for D.B. Cooper Worked

D.B. Cooper was one of the first subjects, like ghosts and trepanation, to catch my attention as a kid. I remember seeing his story first on the old NBC series Unsolved Mysteries, and I still hear Robert Stack's voice narrate when I imagine the staircase lowering from the jet in flight and Cooper jumping into the night sky over Washington. When I came to HowStuffWorks.com and worked as the history writer for a time, this was one of the first article ideas I pitched.

One of the parts of the D.B. Cooper story that makes it so enduring isn't just the mystery alone. It's also the tantalizing clues or the theories from retired FBI agents that float to the surface of the media from time to time and revive the whole discussion again. The D.B. Cooper mystery is alluring because it may never be solved (and I kind of hope it isn't).

But there is also a darker side to it -- even darker than the crime itself. The Cooper theft led to a new world where hijacking is possible. In just a few short years, taking control of airplanes filled with hostages became too regular an occurrence. I don't think you can pin that trend entirely on Cooper, but his crime did take away a lot of the naïveté that people once had toward air travel.