Tension on the Ground 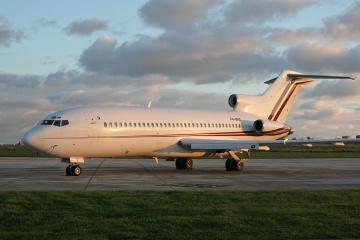 D.B. Cooper hijacked a Boeing 727-100 similar to this one.
MyLoupe/Universal Images Group/Getty Images

When the cops arrived with the chutes and the money, Flight 305 was given notice, and the hijacked crew prepared to land. Assuming correctly that the authorities on the ground had snipers in positions around the airport, Cooper had the flight attendants ask the passengers to lower their window shades prior to landing. The passengers, still unaware of their situation, did as they were asked.

The plane touched down in Seattle. Before the passengers were allow to deplane, Cooper sent Mucklow to get the money and the parachutes. At this point, Tina Mucklow could have stayed safe and sound on the ground outside of the plane with the FBI. But because the passengers and her co-workers were still aboard, she went back onto the plane, essentially trading herself for the passengers.

Once she was back aboard, the passengers were allowed to leave — and with them Florence Schaffner and Alice Hancock. At one point after the plane had emptied, a blissfully ignorant passenger scrambled back onboard to retrieve an item left behind.

And then it was down to Cooper, Mucklow, Scott and Rataczak. Scott and Rataczak had repaid Mucklow for coming back by staying aboard themselves. There was an emergency rope ladder in the cockpit they could have used to easily escape the hostage situation with the plane on the ground.

The Federal Aviation Administration (FAA) apparently didn't have high hopes for the crew remaining behind. The agency's chief psychiatrist had delivered a brief analysis of Cooper and decided that he would parachute from the plane, forcing Tina Mucklow to jump with him, and would blow up the plane after he'd jumped out. The FAA decided to share this info with the cockpit crew.

Cooper asked for food to be delivered to the plane for the crew he kept hostage. And Mucklow said he was steady during the tense situation on the ground. She was steady herself: With the passengers released and the cabin empty except for herself and the hijacker, she sat back down beside Cooper. He offered her a couple stacks of bills for her troubles, but she turned it down. "No tipping allowed," she told him.

As the plane was being refueled, Cooper passed along a request to the flight crew. He wanted the plane to take off with its aft staircase down. The pilot told him this was impossible, but he still looked into it. To his surprise, he learned after communicating via relay with Boeing engineers that while the plane could not possibly take off with the aft staircase down, the aft stairs could be lowered mid-flight. This would later provide a tantalizing clue.

After convincing Cooper that this was his only option, staircase-wise, the hijacker relented. They discussed where they would fly next. His answer? Mexico City. The crew informed him that they'd have to refuel along the way, and the cockpit crew suggested Reno, Nevada, and Yuma, Arizona, as the stops. Cooper agreed.