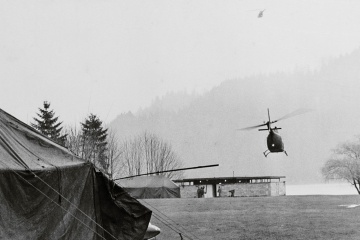 Because Cooper had clearly signaled his intention to parachute from the plane, the FBI scrambled nearby military aircraft to keep tabs on Flight 305. They had a couple issues. The fighter jets they chose were too fast and quickly lapped the 727. Conversely, the helicopter tailing the plane was too slow. Meaning? No one saw Dan Cooper jump.

Instead, the FBI used the crew's report about the plane oscillating suddenly at 8:12 to zero in on a probable landing zone, and they identified the area around Ariel, Washington, near the Lewis River, as the likely spot.

The manhunt was massive. A thousand military troops and police officers combed the woods and riverbanks. A local millionaire suspected that Cooper had dropped into Lake Merwin and rented a small submarine to search for the ransom money. Even the SR-71 Blackbird, the secret stealth spy plane in the employ of the CIA, was scrambled multiple times to secretly surveil the area in search of Cooper — a suspicious tidbit that would emerge later.

The FBI interviewed everyone in the region with the last name of Cooper. And it is through this canvassing that we come to one of the biggest misreportings of all time. At one point, cops (or a record clerk, depending on whom you ask) discussed in front of a reporter (either UPI or AP, depending on whom you ask) about possible suspects named Cooper who could have pulled off such a crime. One mentioned a D.B. Cooper. The reporter filed a story saying authorities were looking for a D.B. Cooper, and the name Dan Cooper became irreversibly altered. Later on, the FBI would learn that Dan Cooper was the name of a popular comic book character in Belgium, an ace Canadian jet pilot, who was created in the early 1950s.

For its part, the FBI believed Cooper died during the jump. Ralph Himmelsbach, a blowhard field agent from the Seattle office who was a pilot himself, had been following Flight 305 in the helicopter that hadn't been able to keep up. Himmelsbach wasn't the lead agent on the case, but he was the most dedicated to it and became the most famous fed associated with D.B. Cooper. He was also the one who gave the case its official code name, NORJAK (for "Northwest hijacking"), and self-published a book about the case in 1986.

Himmelsbach believed Cooper probably hadn't even gotten his chute open and had plunged to his death, winding up buried by the impact on the forest floor in the Cascade Mountains.

After he retired in the early 80s, Himmelsbach finally got the chance to meet with Capt. William Scott, the pilot of Flight 305, and after interviewing him, he came to believe the probable landing zone was actually 40 miles east of where the manhunt had focused.