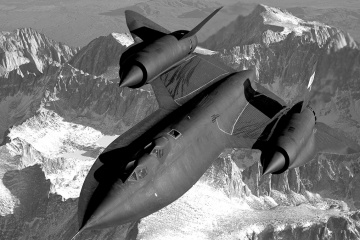 The CIA sent out one of its SR-71 Blackbirds in the search.
John Parrot/Stocktrek Images/Getty Images

Schaffner was extremely freaked out during the hijacking. In fact, while the Cooper crime is widely considered victimless, Schaffner said later: "I was thinking about dying. That's all I thought." Both she and Hancock spent relatively little time with Cooper.

Tina Mucklow, however, spent five hours with him and was also deeply affected by the hijacking. She spent the 1980s as a nun in an Oregon convent and has always refused to speak publicly about the incident.

Analysis of Cooper's behavior and decisions has yielded some potential clues. He chose a military chute over a superior recreational chute. This suggests he had perhaps military experience with skydiving and was not a recreational skydiver. But a great many people in skydiving circles who follow the case point out that just about anyone with parachuting experience would note the dummy chute Cooper chose as his back up and avoid it.

It seems insane to suggest that Cooper planned the heist without any prior parachuting experience. So was he military and simply overlooked the X, or an inexperienced civilian who noticed it and missed its meaning?

He also knew the plane extremely well. He knew about its altitude capacities, wingflap capabilities and was noted later by the flight crew as being obviously familiar with the interior of the cabin. Yet he initially believed that he would need Tina Mucklow's assistance in lowering the aft staircase midflight. Was he a pilot? An airline employee of some sort?

His awareness of the aft staircase and its potential to be used for a skydiving jump also raises flags. In 1971 only a very small group of people knew of the 727-100's ability to lower the staircase mid-flight. This group was limited to the aircraft's engineers at Boeing and the CIA. During the Vietnam War, the CIA flew covert missions into Cambodia (where it most decidedly was not supposed to be) in 727-100s and used the aft staircase midflight to drop supplies and agents. These operations were a closely guarded secret for years. So was Cooper a CIA agent? Does this explain why the CIA was so generous with its SR-71 spy plane in the search for Cooper?

Cooper was also described by everyone who interacted with him as calm and even considerate. He never lost his head, and he even tried to pay for the drink he ordered during the flight. The only threat was in the initial ransom demands. And he was obsessively meticulous and careful to leave behind as little trace of himself as possible.