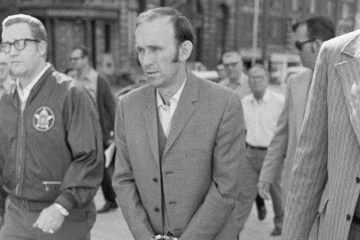 The FBI refuses to say one way or the other, but some estimates of the number of suspects in the case over the years approach 1,000. A great many have been state prisoners who confessed in the hopes of being transferred to vastly preferable federal facilities. Others have been turned in by their families.

One of the first suspects to emerge was Richard Floyd McCoy. In February 1972, four months after the Cooper heist, McCoy hijacked a 727-100, demanded and received $500,000 in ransom and successfully landed and escaped after he jumped from the aft stairs of the plane over Utah.

McCoy was a Green Beret in Vietnam, experienced with skydiving, bore some resemblance to Dan Cooper and, not least of all, pulled off a virtually identical heist. McCoy was found five days after his heist and was sent to prison. He escaped by making a fake gun out of plaster and rode out of the prison on a garbage truck. He was killed shortly after in a shootout with police. However, he's considered likelier a copycat since he was 29 while Cooper was in his 40s and because his family said he was at home with them in Utah for Thanksgiving in 1971.

Duane Weber was a career criminal, both as himself and as John C. Collins, an alias he used. Combined, his two personas had done 16 years in the pokey. Weber's wife, Jo, said that nine days before he died in 1995 he confessed to her on his deathbed that he was Dan Cooper. Jo had no idea what her husband was talking about. He blew up, never explained further and the two dropped it.

Later on, Jo learned that Dan Cooper was the original name of D.B. Cooper and began poking around in her husband's past, becoming more convinced as she did. She has become his greatest champion and promoter of her late husband being Cooper (she even commented that Duane was Cooper on an earlier HowStuffWorks article about the heist).

In addition to describing his confession, Jo said that in 1979 she and Duane were on a car trip through the area where the Cooper hijack took place. At one point he pointed to a patch of woods and told her, "That's where D.B. Cooper walked out of the woods." On the same trip, she said he stopped the car on a bridge over the Columbia River around the area where Brian Ingram found the $5,880 in ransom money the next year. Duane told Jo to wait in the car, while he opened the trunk and was gone for several minutes. She said she couldn't tell where he went or what he did. Despite being ruled out by the FBI thanks to DNA testing, he remains widely liked as Cooper by many people.

As does Kenny Christiansen. His brother Lyle outed him in a strange effort to get Nora Ephron to direct a movie about D.B. Cooper with Kenny as the culprit. Despite that bizarre basis, there are quite a few interesting coincidences that link Dan Cooper and Kenny Christiansen.

For one, Kenny looked a lot like the sketches of D.B. Cooper. He was a flight purser for Northwest Orient Airlines. He was a former paratrooper with experience using military parachutes. He was quiet and calm, smoked cigarettes and drank bourbon, and lived in the area where the hijacking took place. In 2011, reporter Geoffrey Gray showed Florence Schaffner a photo of Kenny from that era, and she thought he "might be onto something." Like Duane Weber, Kenny Christiansen also tried to make a deathbed confession of some sort, but his brother wouldn't hear him out, and whatever secret he had to share went with him to the grave.