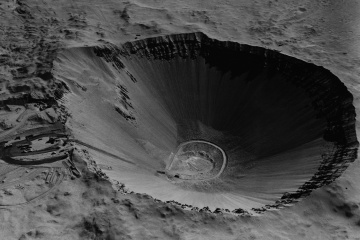 In 1962, a 100-kiloton thermonuclear detonation at the Atomic Energy Commission’s Nevada test site created the Sedan crater, an enormous hole more than three football fields wide and one deep.
Historical/CORBIS

It all started up again on Dec. 10, 1961, when Plowshare scientists detonated a bomb deep underground on a subterranean salt deposit in the vicinity of Carlsbad, New Mexico. The operation was code-named Gnome, making one wonder, who exactly is responsible for coming up with these code-names anyway? But that's a subject for a different article. A 3-kiloton blast, Gnome had multiple goals. The Operation Plowshare scientists hoped to learn more about the possibilities of producing and collecting isotopes while measuring heat production and seismic activity from the blast, in addition to collecting data pertaining to neutron physics.

That was all very well, but harking back to the Suez crisis, Plowshare scientists were particularly excited about using nukes to dig really big holes. Accordingly, on July 6, 1962, they used the next experiment, called Sedan, to blow a giant hole in the Nevada desert. Not messing around this time, they deployed a 104-kiloton bomb to do the job. The result was a crater 437 yards (400 meters) in diameter and 109 yards (100 meters) deep. To make a hole that big the bomb had to move some dirt — 12 million tons (10.9 million metric tons) of it, in fact [source: Colleen].

That worked pretty well, so Operation Plowshare continued with the excavation experiments. To see whether they really could excavate a canal-sized ditch, they eventually worked up to the Buggy project, which involved five 1-kiloton bombs laid in a row and detonated simultaneously — a nuclear row-charge, in short, and the only one ever conducted by the U.S. [source: Colleen].

At the same time, the program was looking into another promising area of development — gas stimulation. This involved putting bombs deep down near recalcitrant "low-permeability" natural gas deposits and blowing them up. The idea was to loosen things up down there and let the gas flow more easily. We know this process now as "fracking." Of course, gas companies don't frack with nuclear bombs these days, and there's a reason for that, which we'll get to shortly.

Although less glamorous than nuclear excavation, gas stimulation turned out to be the most promising of the avenues explored by Operation Plowshare. It was also the only branch of the project that involved private corporations. These included the El Paso Natural Gas Company, the Austral Oil Company and CER Geonuclear Corporation [source: OSTI].

Testing went on for 12 years, and during that time Plowshare undertook 27 experiments featuring 35 individual bombs. And then, the explosions stopped in 1973 [source: OSTI].