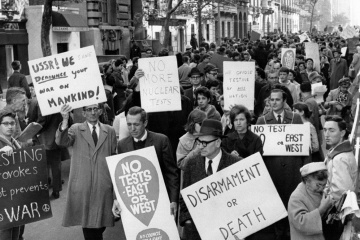 Demonstrators protested against the nuclear arms race in front of the USSR embassy in New York City, circa 1960.
Keystone-France\Gamma-Rapho via Getty Images

In the early, heady days of Operation Plowshare there had been so many projects the scientists wanted to undertake, so much stuff they wanted to blow up. There were highways to cut through mountains; dams, canals, harbors and quarries to excavate; underground storage reservoirs to create ... the possibilities seemed endless.

Indeed, the list of planned projects was impressive. There was a proposal to nuke such a deep channel across Central America that there wouldn't be any need for those pesky locks found on the Panama Canal. This was known as a sea-level waterway.

Then there was Carryall, which was going to move Interstate 40 and a major rail line to a route through the mountains of southern California. With just 22 nukes, the plan suggested, it would be possible to shift 68 million cubic yards (520 million cubic meters) of earth to cut a valley 2 miles (3.2 kilometers) long and 109 yards (100 meters) deep.

But the really ambitious project was called Chariot. The idea with Chariot was to make a whole new harbor high above the Arctic Circle in Alaska. And while there was supposedly some military advantage to the project, the main goal seems to have been simply to prove it could be done. The first iteration of the plan involved exploding 2.4 megatons of nukes, but this was subsequently dialed down to a total of just 400 kilotons.

Chariot nearly happened. The Department of the Interior designated a Delaware-sized chunk of land for the project, and the Atomic Energy Commission carried out 40 environmental studies, but there were a couple of problems. Local residents were downright hostile toward the project. Also, it was unnecessary. Apart from demonstrating how cool nukes could be if used for civil engineering, there didn't seem to be much of a point to the whole thing. The plan was shelved as early as 1962 [source: Department of Energy].

Plowshare carried on, but by the early 1970s the writing was on the wall. Citizen groups were becoming increasingly vocal about their concerns that Plowshare projects might trigger earthquakes, cause radioactive gas flaring, damage health and lead to general environmental catastrophe. While none of these things had actually happened yet, the possibility that they could was enough to heighten public anxiety. Much of that anxiety stemmed from fears surrounding the results of above-ground nuclear weapons tests. Some members of the burgeoning environmental movement alleged that people living and working downwind of some of those tests were developing cancer at an alarmingly high rate because of radioactive fallout [source: Hesse]. What, they wondered, would happen if underground radioactive material contaminated the ground water?

Also, it turned out that conventional alternatives were a lot cheaper than nuclear weapons. Even gas stimulation was a bust. Nuclear blasts had a tendency to contaminate natural gas with tritium, which rendered it unusable. Worse still, the process was just too elaborate and expensive to justify. By 1974, Operation Plowshare had poured $82 million into the gas stimulation program alone. The government calculated that it would require 25 years of subsequent gas production from the sources stimulated to make back just 40 percent, at best, of that investment [source: OSTI].

Environmentally unacceptable, commercially unviable, Operation Plowshare was shut down officially and for good in 1975. The only evident lesson learned from the whole undertaking seems to have been that using nuclear weapons for civilian engineering projects is highly impractical no matter how you slice it.

Operation Plowshare shouldn't be confused with the Plowshares Movement. On the contrary! The Plowshares Movement is an anti-nuke organization, made famous by the "Plowshares Eight" who broke into a nuclear facility in Pennsylvania where they hammered on warheads and poured blood on files and documents. They're still at it. In 2012 three Plowshares activists managed to break into a nuclear weapons facility in Tennessee where they spray painted slogans, hung a banner and poured some more blood around the place. Even if you don't agree with their politics, you have to worry about the ease with which an unarmed nun and some friends breached a "high-security" site full of uranium.