When World War I soldiers returned home to Australia, the government was eager to show its support for veterans. Take land, the government said. Grow wheat and we'll pay handsomely for it. It was a mission for the bright-eyed and hopeful, for men eager to cultivate their futures as they cultivated the soil in Western Australia.

You could say the plan was flawed from the start. The government had 90,000 hectares (222,395 acres) to go around, but that wasn't enough for the nearly 5,000 veterans who wanted it. Land was doled out as it became available, and the choicest lots were given away first. The remaining veterans got land in Perth, which wasn't ideal for farming. What's more, in the years that followed the initial land handout in the early 1920s, Western Australia combated drought, frost and a significant rabbit infestation. While veterans labored against the elements and the wildlife, mounting financial challenges from the Great Depression threatened to undercut all they'd been promised.

Let's put this in perspective. Pence is equivalent to pennies. A shilling is 12 pence. And there are 20 shillings in a pound. In today's market, 1 British pound is worth about $1.50. So, these veterans were being offered tiny sums of money — originally promised a quarter of a pound per bushel and settling for an even smaller fraction. However, by this point, the veterans were desperate to make money off their wheat crops, and the stage was set for a modestly fruitful harvest.

No one could have anticipated what happened next. In the annals of history, perhaps there's no goofier foe than the Australian emu, a flightless bird that stands nearly 6.5 feet (2 meters) tall and weighs close to 100 pounds (45 kilograms). In warfare, it's essential to know the enemy, so let's pause and examine the bird that dogged the veterans.

“Emus are solitary, for the most part,” says Eric Slovak, bird keeper at the Smithsonian National Zoological Park. “They do get together in breeding season, but emus would prefer to be by themselves.”

The exception is when they're foraging. Slovak likens that behavior to humans going out solo to a fast-food lunch. “You're at McDonald's around lots of other people, but you're not socializing. You're just there for the food.”

OK, so they're big, solitary, hungry birds. Not much of a threat, right? Multiply that emu you're envisioning by 20,000 — that's how many descended upon Western Australia in 1932. Until 1922, emus were a protected species; after that time, they were reclassified as vermin. “They'll eat anything they can get their mouths on without hunting,” Slovak says. “They're grazers. They like nuts and berries, baby grasses.” Wheat? Yeah, they'll eat that. Faced with a seemingly endless buffet of it, the opportunistic birds homed in on the veterans' plots.

Beaten down by weather and a volatile financial market, the veterans leaned hard on the government. Help us, they implored. Maj. G.P.W. Meredith led a military offensive against the emus, but there were a few conditions. The veterans had to foot the bill for the ammunition (Lewis machine guns were used in emu combat), and they had to provide food and lodging for the men assigned to this curious mission. As a sidenote, a cinematographer from Fox Movietone accompanied the military to film the emu effort. Historians assume the footage would've been used in propaganda films to illustrate how the government was aiding its veterans — but (spoiler alert) the mission didn't go exactly as planned.

Armed with the knowledge that a slingshot can take down an ordinary bird, you'd probably hazard a guess that a machine gun could wipe out the emus easily. But you'd be wrong. “If they're shot at, they're not going to run with any concrete direction. They just kind of spaz out,” Slovak says. Emus are made to run. Their legs, head and neck move with elegant fluidity while their bodies stay parallel to the ground. “The body looks like a wave. The legs go to the left, the head goes to the right. And they all run in different directions, like dropped marbles,” Slovak explains.

Meredith and his men couldn't get a straight shot at the emus, who stayed out of range of the machine guns, even when enterprising veterans suggested putting them on vehicles and pursuing the birds as they ran. The military wasted a ton of ammunition (to be exact, of the 10,000 rounds brought for the mission, 2,500 were used to kill just 200 birds), and not only did the emus evade the troops, they destroyed even more farmland in the process. “The ground [beneath them] gets torn up because of how powerful their legs are when they hit the [soil],” Slovak says.

The veterans were dispirited, and their land was devastated. Meredith had a lot to answer for. Why had so much ammunition been wasted? And was the effort even humane? Then there was the matter of money. The veterans promised to pay for the ammo, but the mission ultimately failed. Could the sum be forgiven?

This example of ridiculous history can't be tied up conclusively with a tidy bow, and some details, such as who was ultimately held responsible for the cost of ammunition, are unclear. We do know that the veterans learned painfully from past performance that rifles, not machine guns, were the best way to handle nuisance emus. They continued their war in 1:1 battle — veteran against bird — and the Australian government later placed a bounty on emus to control the population. And, finally, we also suspect that the Fox cinematographer got some epic b-roll while on location.

Now That’s Cool
Emus were pulled off Australia’s protected species list in 1922, and that was perfect timing for veterans-turned-farmers who staged war against these giant birds when they raided their wheat fields. In a really strange battle of man with machine gun vs. giant bird, the giant bird won.

You Should Probably Start Keeping Live Bees as Artwork

Predicting Human Obsolescence, One Job at a Time 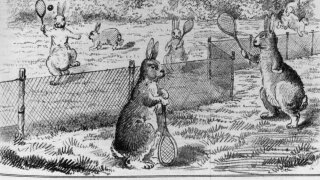 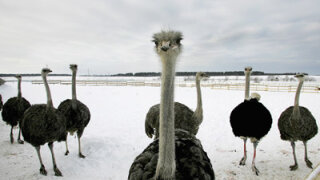 Why do ostriches have red meat instead of white? 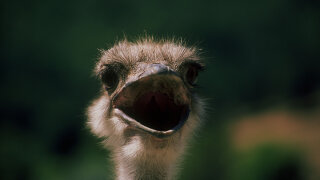 Do ostriches really bury their heads in the sand?