The last queen of France's  name has become synonymous with extravagance and being out of touch. But there's a lot more to Marie Antoinette than meets the eye. For instance:

1. Her Wedding Gown Caused an Uproar.

At the tender age of 14, Marie Antoinette married 15-year-old Louis-Auguste, heir to the French throne. Her silver wedding gown was adorned with diamonds, a gift from her mother Empress Maria Theresa of Austria. There was just one small problem: The dressmakers had made a mistake with her measurements, and the gown was too tight. As hard as they laced up her corset, they could not get the dress to close, and there was no time for a replacement gown. With thousands of people looking on, the young girl walked to meet her bridegroom with "a broad stripe of lacing and shift quite visible, which had a bad effect between two broader stripes of diamonds," as one wedding guest put it. And worse was yet to come.

Following the wedding reception, custom demanded that a large retinue of noblemen and women helped the royal couple get undressed and into bed. Then the courtiers drew the curtains of the four-poster bed and left Marie Antoinette and Louis to get on with their "marital duties" as it were. Perhaps all that scrutiny unnerved the prince — the marriage remained unconsummated for seven years, a fact that was well-known at court. Not only was Marie Antoinette frustrated at Louis' lack of interest, she was humiliated by not being able to produce an heir. Maria Theresa dispatched her son Joseph to see what could be done about the sorry situation. Whatever he told them or did must have worked because the couple later wrote to thank him. Some historians also believe Louis suffered from a condition called phimosis, which makes sex painful, and he had surgery to correct it.

Although that's probably the first thing that comes into your head when you think of the French queen, there's no evidence she made that retort upon hearing her subjects had no bread to eat. For starters, the phrase "Qu'ils mangent de la brioche" literally means "Let them eat brioche," which is a rich bread made with eggs. Not a cake.  Second, the phrase was first noted in a book by philosopher Jean-Jacques Rousseau, which he attributed to "a great princess." Marie Antoinette was only 10 when the book was written, so it was likely she was not the princess he had in mind. The first time the phrase was attributed to her was more than 50 years after the French Revolution.

4. But That Doesn't Mean She Wasn't Clueless.

Marie Antoinette loved to spend money, partially because she was bored, but also because she was expected to promote French fashion. Louis ascended to the French throne in 1774; Queen Marie Antoinette ordered 300 dresses per year, as well as lots of expensive jewelry. She also had a model farm built on the grounds of her palace at Versailles, where she and her ladies-in-waiting dressed up and pretended to be shepherdesses and milkmaids. The ordinary people, reeling from paying very high taxes (some of which financed the American Revolution), blamed her for their problems, even though most of the nobility were themselves against paying taxes.

5. She Showed Great Courage in Her Last Days.

On July 14, 1789, some 900 Parisian workers and peasants invaded the Bastille prison and seized a cache of weapons. On Oct. 5, a mob descended on Versailles, captured the royal family and took them to Paris. With the king paralyzed by indecision, Marie Antoinette held council with various ambassadors and ministers and wrote letters to foreign leaders begging them to invade France and rescue her family. Eventually the couple was arrested and put on trial separately. Six months after Louis' execution, Marie Antoinette was also sentenced to death. On her way to the guillotine, she rode in an open cart with thousands of onlookers jeering. Her hair was shorn and her hands tied behind her back. A priest urged courage. "Courage?" Marie Antoinette replied. "The moment when my ills are going to end is not the moment when courage is going to fail me."

This Tiny Bird Can Fly for 10 Months Without Landing, Biologists Discover

San Francisco Has Its Very Own Sinking, Leaning Tower 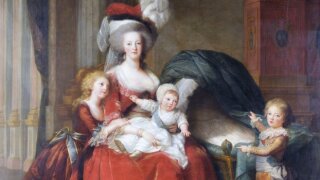 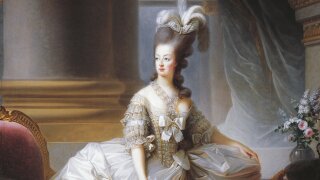 Why was Marie Antoinette's wedding dress so scandalous?

You're Saying It Wrong: The Misquote Quiz