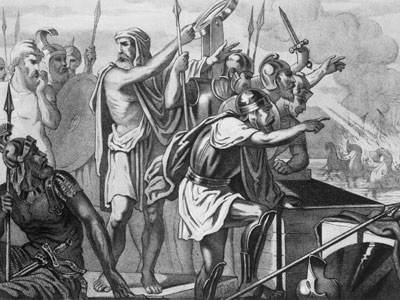 Archimedes was born in 287 B.C. in the city-state of Syracuse, then a part of ancient Greece, in what is modern-day Sicily. Aside from his travels to Egypt for his formal education (read more about that in "Did the ancient Greeks get their ideas from the Africans?"), Archimedes spent his life in Syracuse. When the Roman army set sail to lay siege on his home in the year 214, Archimedes turned his attention from calculations to finding new and inventive ideas for dealing death to Roman legions.

One of Archimedes' more famous quotes is, "Give me a lever long enough and a place to stand and I will move the world" [source: Stanford]. Archimedes used his knowledge of physics to fend off Roman ships approaching the fortified walls of Syracuse. One of the war machines Archimedes created was a giant iron claw, operated by virtually the entire population of Syracuse from inside the city's walls. Outside, the claw was capable of picking up entire Roman ships and plunging them into the sea. Archimedes used catapults and heavy timbers to hurl objects at the ships in the distance [source: Archimedes Palimpsest].

These war machines were complex, but perhaps the most effective (and coolest sounding) of Archimedes' instruments of destruction was the death ray. The name evokes thoughts of some huge, clumsy steampunk contraption pushed to the edge of the Syracusian walls. One can imagine the Roman soldiers' terror-widened eyes as the death ray came into view and made an increasingly high-pitched hum as it powered up before suddenly unleashing a deadly laser upon the ships, reducing them to atoms in one massive burst.

This wasn't the case. Instead, the death ray was actually a series of mirrors that reflected concentrated sunlight onto Roman ships. The ships were moored within bow and arrow range (in ancient Greece, anywhere from 200 to 1,000 feet (about 60.96 to 304.8 meters)). According to legend, the Roman ships were burned by the collective, condensed sunlight shone from these mirrors [source: McLeod]. Ship after ship in the Roman fleet caught fire and sank in the Mediterranean, casualties of the death ray.

The historian Galen was the first to describe the death ray in an account of the sack of Syracuse he wrote more than 350 years after the siege ended. Although other historians recorded the siege in earlier writings, none mentioned the death ray. Because of these earlier omissions of the death ray, the contraption's often viewed as pure myth, fantasy or exaggeration. Over the years, numerous attempts have been made to prove or disprove whether Archimedes' death ray could've worked -- but these experiments have yielded mixed results. At least two of them proved the death ray was possible. Keep reading to find out about those.