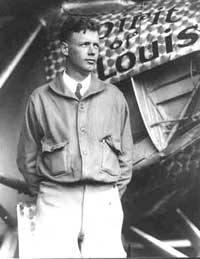 If you were to talk to just about anyone who was alive in May of 1927, they can tell you exactly where they were and what they were doing when they learned that Charles Lindbergh had made it to Paris. The idea that someone could fly across the Atlantic Ocean was so revolutionary that it completely captured people's imaginations. Overnight, Charles Lindbergh became a celebrity of epic proportions.

How big a celebrity? Huge headlines in nearly every newspaper trumpeted his flight. Parades and parties celebrated him. A postage stamp commemorating his flight appeared less than one month after he landed. The stamp bore the image of his airplane along with the phrase "Lindbergh - Air Mail." His airplane hangs in the National Air and Space Museum in Washington, D.C. For a period of years, Lindbergh was the most famous person in the world.

Why was his flight so inspiring? First, keep in mind that airplanes were still new. The first Wright Brothers flight occurred in 1904, and it was more than a decade before airplanes became commonplace. In 1919 hotelier Raymond Orteig offered a $25,000 prize for the first person to fly nonstop from New York to Paris. In 1927 the prize remained unclaimed. The prize generated a lot of publicity, and the fact that people had tried but failed made the feat seem impossible. For a plane to fly 3,600 miles was just unimaginable in the 1920s.

Lindbergh's airplane, the Spirit of St. Louis, was also unique. Dubbed a "flying gas tank," the plane could hold more than 450 gallons of fuel. It had a 223 HP radial engine, a 45-foot wingspan and got about 10 miles to a gallon, giving it a range of 4,200 miles. The plane, engine and pilot weighed only 2,500 pounds, but a full load of gas weighed 2,700 pounds, more than doubling the weight of the plane. To keep the weight down, Lindbergh left off the radios, the brakes, the pilot's parachute and even the front window (which he replaced with another gas tank). For comparison, a modern Cessna 172 has a 36-foot wingspan, weighs about 1,800 pounds with a pilot and holds only 56 gallons of gas. Its range is only about 600 miles. Adding another 400 gallons of gas to a Cessna would make it totally unflyable.

The Ryan Airlines Corporation in San Diego custom made Lindbergh’s plane. Once the plane was finished, Lindbergh flew it from San Diego to New York to make sure it worked properly. That flight set a record in itself.

One thing that was unique about Lindbergh's attempt to cross the Atlantic was that he planned to do it alone. Every other team in the competition had two or more people to share the piloting and allow for sleep. Flying alone for more that 30 hours was incredibly aggressive but really saved on weight by keeping the plane small. Adding to the intrigue, one of the teams crashed in April, killing both pilots. A team from Paris made an attempt in early May, and they were lost at sea.

Lindbergh left New York in the evening on May 20, 1927, heading toward Nova Scotia to minimize his time over water. The 15-hour leg over the Atlantic Ocean was a harrowing experience. He had only a compass to steer by, and magnetic storms interfered with it. He had no way to account for wind, no landmarks to steer by and no one to talk to. He encountered storms and other obstacles along the way and overcame them despite lack of sleep.

When he finally spotted land, he was over Ireland and from there flew to Paris. Hundreds of thousands of people gathered at the landing field to meet him. His life as the most famous man in the world had just begun.

For lots more information on Charles Lindbergh's flight and related topics, check out these links: