The Basics of King Arthur 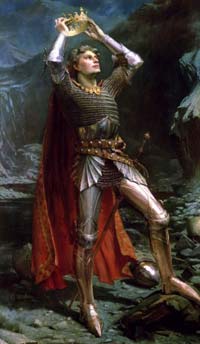 Before we get into the historical basis for King Arthur, let's review the basics of his story. Arthur ascends to the throne after Britain's been invaded and its king deposed. A prophecy stated that the only man who could rightfully retake the throne had to be able to pull a sword from an ancient stone. One day, a young stranger walked up to the stone and pulled the sword from it effortlessly. The peasants cheered because they finally had a king again.

In some stories, the sword that Arthur pulls from the stone is Excalibur. In others, he is given Excalibur after he breaks his first sword. This sword comes from a woman known as the Lady of the Lake, a mysterious, nymphlike person eternally associated with the magical island of Avalon.

Arthur goes out onto the lake in a barge, and the Lady (called anything from Nimue to Viviane in various stories) stretches her hand up from the lake holding the sword. In some stories, Merlin, a wise old magician, appears at this point in Arthur's life, while in others he appears in Arthur's childhood. Like the Lady of the Lake, he's often associated with Avalon and also with pagan legends, but he's sometimes depicted as a prophet of the Holy Grail as well. After Arthur becomes king, he builds Camelot, a castle stronghold.

In order to fight the evil forces still sacking and pillaging the countryside, he recruits the best knights in the country to join him. These knights become the Knights of the Round Table. Some knights appear again and again in the legends (and have stories of their own, apart from Arthur), including Lancelot, Gawain, Bedevere and Galahad.

During his travels, Arthur meets and marries a beautiful young woman named Guinevere. After Arthur and his knights defeat all outsiders and calm reigns over Britain, there is a period of peace and happiness at a utopian Camelot. However, Lancelot, Arthur's most trusted knight and companion, falls in love with Queen Guinevere. In some versions of the legend, this secret affair is what leads to the fall of King Arthur and of Camelot. The affair is exposed, and Arthur goes to war with Lancelot after condemning Guinevere to death.

In other tales, man named Mordred tries to take both the throne and Guinevere for himself. Sometimes this is with the assistance of Arthur's half-sister, a pagan named Morgan le Fay. Ultimately, Arthur and Mordred meet at the Battle of Camlann. Mordred is killed and Arthur is heavily wounded.

As he lies on the battlefield, Arthur tells Sir Bedevere that he must return Excalibur to the lake. Bedevere resists at first, knowing the power that Excalibur holds. But finally, he casts the sword into the water and a feminine arm emerges to catch it. The wounded Arthur is taken to Avalon to recover from his wounds. In some stories, Arthur dies and is buried there. In others, he recovers and waits for the right moment to emerge and unite Britain again.

Although you may have already been familiar with the basic story, did you know that in one version, Lancelot becomes a monk? Next, we'll look at the literary history of Arthur.­

Why a round table? The idea is that all who sit at the table are equals because it has no head. The poet Wace was the first writer to mention King Arthur's round table in his "Roman de Bruit," or verse history of Britain. There are two versions of the table's origin: In one, it was given to Arthur as a wedding gift by Guinevere's father King Leodegrance (who got it from Arthur's father, Uther Pendragon). In another, the table was built by Merlin and meant to resemble the table used at the Last Supper.