The Corps of Discovery set out to explore the Missouri River and made their way across the continent to the Pacific Ocean. See more pictures of Lewis and Clark's expedition. 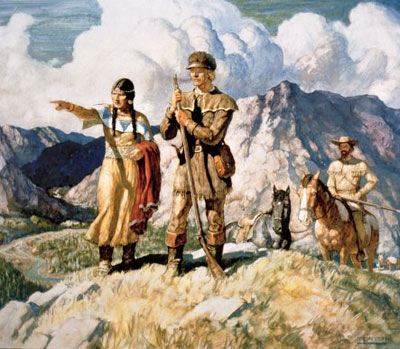 Meriwether Lewis and William Clark led the Corps of Discovery from 1804 to 1806 to explore the new territories of the Louisiana Purchase, with the aid of Sacagawea. 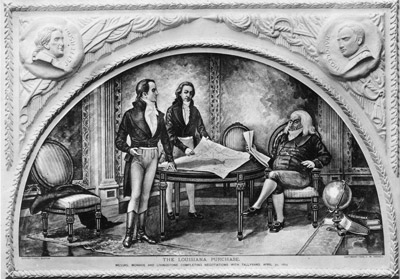 The Louisiana Purchase was made official on April 30, 1803. Statesmen James Monroe and Robert R. Livingstone led the negotiations with Comte Talleyrand for the property that Lewis and Clark would explore. 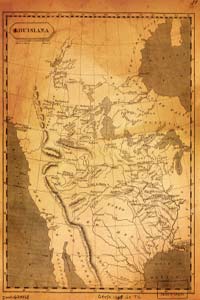 And what a property it was. The Louisiana Purchase doubled the size of the United States in one fell swoop. Read more about the the men in charge of the Corps of Discovery and their adventures in the following pictures. 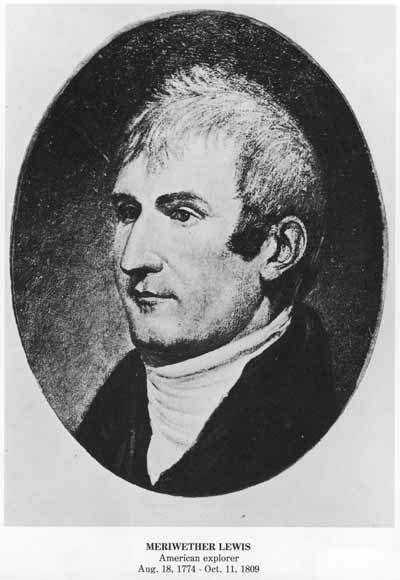 Meriwether Lewis was a veteran of the U.S. Army who also served as a secretary to President Thomas Jefferson. See William Clark in the next photo. 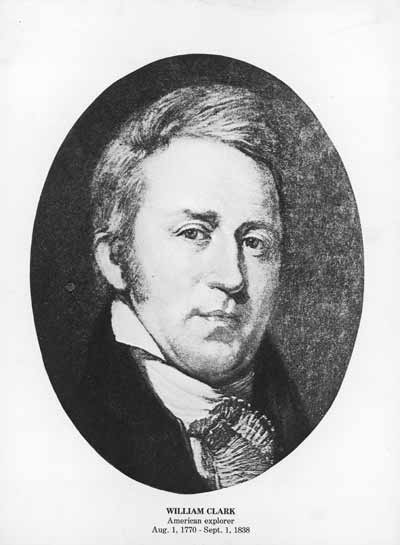 William Clark was also a militia and U.S. Army veteran. Clark's main responsibilities were for cartography, supplies and hunting. He was also a skilled negotiator with local tribes. 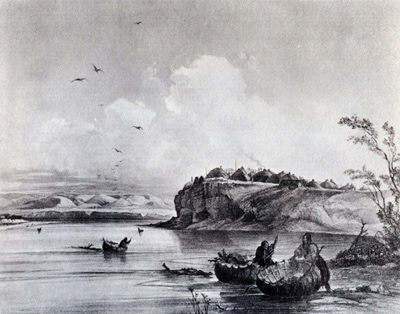 The Corps' journey started from Camp Dubois, Illinois on May 14, 1804, and followed the Missouri River west. This illustration shows a typical Mandan tribal village that they came across later in the fall. The Mandans were agricultural rather than nomadic and built fortified villages. 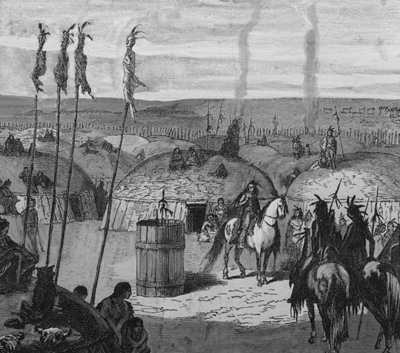 Fort Mandan was built near a Mandan settlement and became the expedition's home for the winter of 1804-05. Lewis and Clark met Sacagawea and her husband that winter. 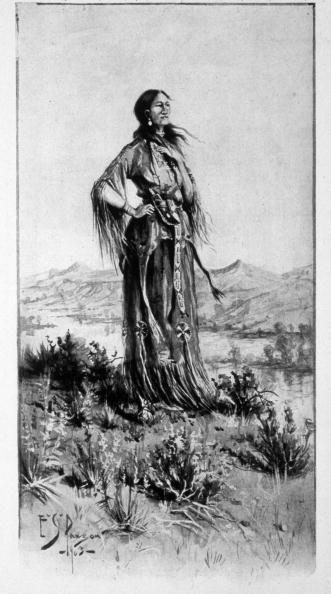 Sacagawea, a young Shoshone native, was married to French Canadian fur trader Toussaint Charbonneau, who was to be the expedition's guide across the Rocky Mountains. 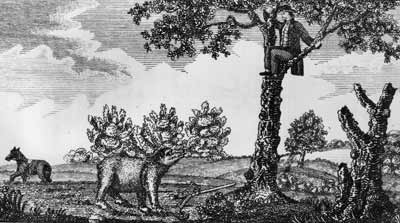 Before they reached the mountains, the expedition had to contend with challenges along the Great Plains and its rivers. In this engraving, a member of Lewis and Clark's exploratory team hides up in a tree after shooting a bear. 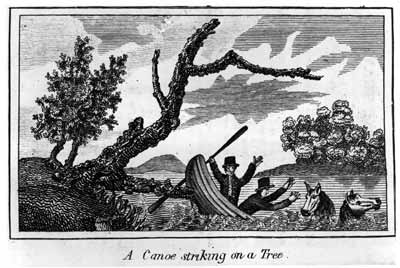 A canoe carrying two men across a river strikes a tree and overturns during one leg of the Lewis and Clark expedition. 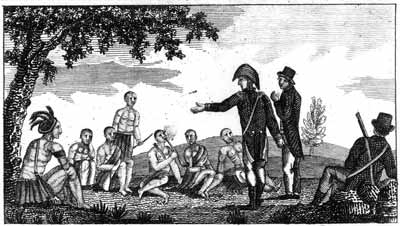 On Aug. 3, 1804, Lewis and Clark held the first official council with Native Americans of the Omaha and Oto tribes at Council Bluffs, Iowa. 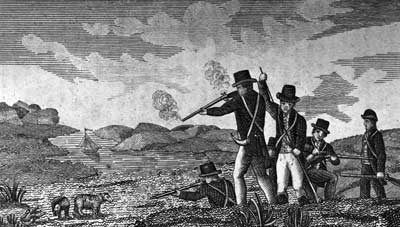 Captain Clark and his men shooting bears on the wide open plains of the American West. Soon they would make their way through mountains. 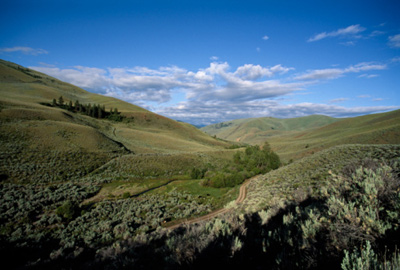 In August of 1805, the expedition crossed the Continental Divide at Lemhi Pass on the present-day Montana/Idaho border. This led them out of Louisiana Purchase territory and into the Oregon Country, the ownership of which was disputed at the time. 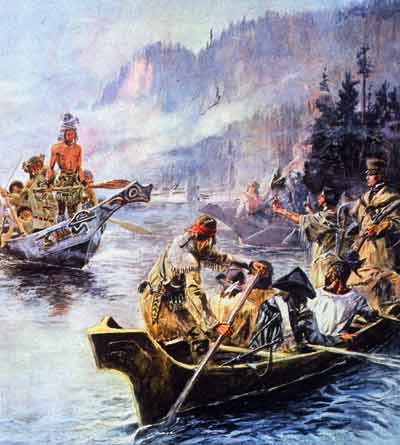 Here, Sacagawea interprets Lewis and Clark's intentions to the Chinook Indians of the northwest. 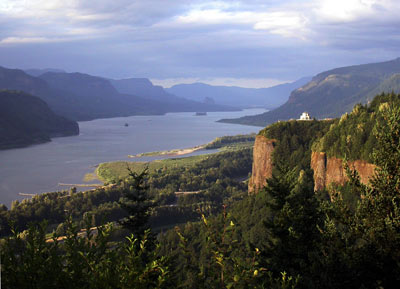 The Lewis and Clark expedition spent the winter of 1805-1806 near the mouth of the Columbia River in Oregon, where it empties into the Pacific Ocean. 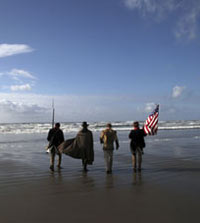 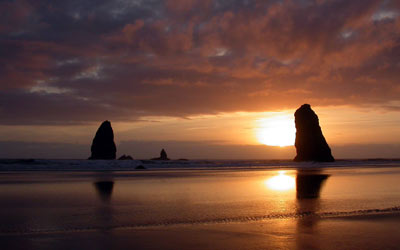 Sunset over the Pacific in Oregon, a view that Lewis and Clark finally enjoyed after more than two years of travel. 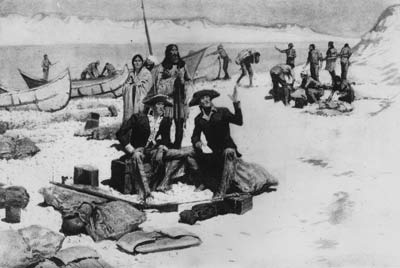 Lewis and Clark camp at the mouth of the Columbia River in this scene. See the fort they built for winter in the following photos. 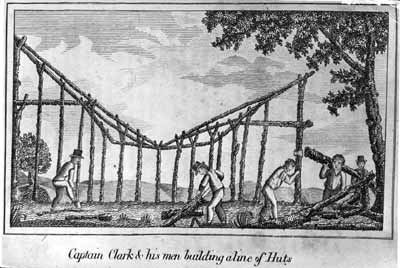 Captain Clark and his men are hard at work on a line of huts in this illustration. 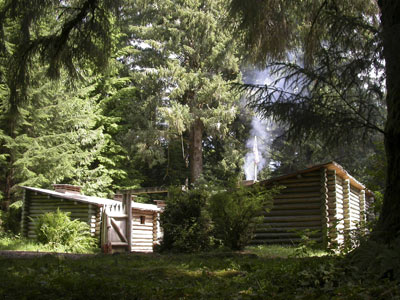 This replica of Fort Clatsop commemorates the site where Lewis and Clark lived out the miserable winter of 1805-06. 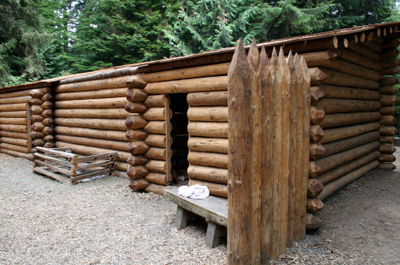 Fort Clatsop, like the earlier Fort Mandan, was named after a Native American tribe that lived in the area. The fort was completed on Christmas Day in 1805. 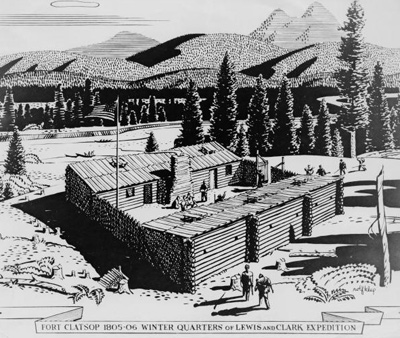 The Corps of Discovery left Fort Clatsop on March 22, 1806 to head back home. 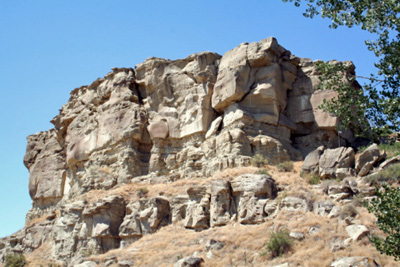 Pompey's Pillar holds the only remaining physical marks of Lewis and Clark's passage. On the way back home on July 25, 1806, Captain Clark carved his name on the face of the butte during his return to the United States through the Yellowstone. 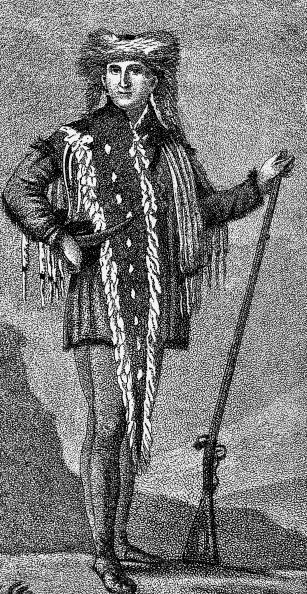 Here we see Meriwether Lewis, decked out for another adventure. Lewis would eventually settle in St. Louis as governor of the new Louisiana Territory. He died in 1809. 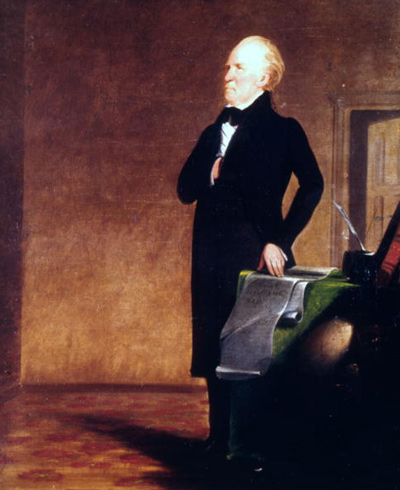 After the expedition, William Clark held a number of posts in the new territories, notably in Indian Affairs and as governor of the Missouri Territory. Clark died in 1838. Read more about How Lewis and Clark Worked.