Who Decides Which Americans Lie in State?

Browse the article Who Decides Which Americans Lie in State? 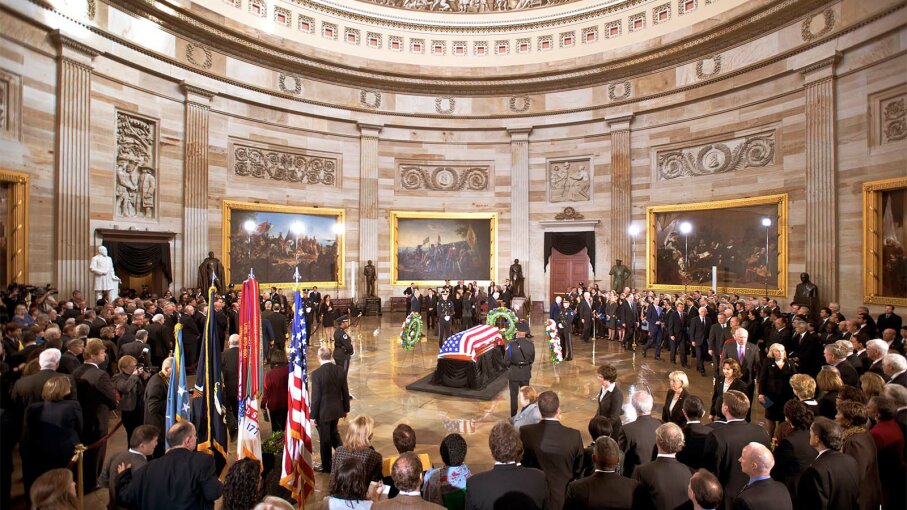 Senator Daniel K. Inouye lies in state in the Capitol Rotunda on Thursday, December 20, 2012. Architect of the Capitol/Public Domain Files

The state of American politics is such these days that the only respite we get from all the bickering and paralyzing partisanship may be in death. There, it seems, is one time and place where we all, or most of us, can come together. The death of a former president is one of those times.

President George H.W. Bush, who passed away on Nov. 30, 2018, was the last civil servant bestowed with this honor. Now it will Rep. Elijah Cummings, the Maryland Democrat who died Oct. 17, 2019, at age 68. Cummings will be the first African American lawmaker to lie in state in the U.S. Capitol, according to historians.

Befitting these men's lifetime of service, their deaths bring us together in rare, somber and ritual appreciation, but when did this tradition of having eminent Americans lie in state begin and who decides which Americans receive the honor?

High Honor for an Exceptional Life

The practice of lying in state began in the United States with Henry Clay, a Congressman and U.S. Secretary of State from Kentucky known as "The Great Compromiser." During much of Clay's life, the country was almost literally sectioned off, at odds over the question of slavery. Clay pushed through legislation to quell secession talk and to avoid civil war. (On his tombstone are these words: "I know no North — no South — no East — no West.") He died on June 29, 1852, and lay in state in the Capitol Rotunda on July 1, 1852.

Why was no one honored in this way before Clay? One reason: The Capitol wasn't completed until 1824.

Today, the honor is reserved for the nation's "most eminent citizens," according to the Architect of the Capitol, the agency charged with the stewardship of all the buildings and the 570 acres (231 hectares) of Capitol Hill grounds. According to custom and regulations, government officials — presidents, members of Congress and some military figures — lie "in state." The honor is not automatically extended to anyone except presidents and former presidents, and not everyone entitled to honor has it accepted by their survivors. Notable private citizens, too, sometimes get a rest in the Rotunda before burial, but they are said to lie "in honor." Coffins are placed in the Rotunda (the central part of the Capitol) under the Capitol Dome, often on a 2-foot-high (0.7-meters-high) catafalque made of pine, originally used to support the casket of Abraham Lincoln. The Lincoln catafalque is not used for those lying in honor.

Not all members of Congress who pass away, or all presidents, are afforded the honor of lying in state. The last Congressperson before Cummings to lie in state was Senator John McCain, and he was only the 13th senator to do so. Before McCain it was Senator Daniel Inouye of Hawaii, who lay in state in 2012. Civil Rights icon Rosa Parks is the only woman ever to lie in honor (or state, for that matter). That was in 2005.

Congress has to propose and approve of the honor, either by pushing through a resolution or simply by having leadership agree to it. (Most often, no resolution is needed.) Once Congress decides on the honor, a whole cadre of people are set loose to get the Rotunda — which is open to the public on most days — ready. From the Architect of the Capitol:

When the Architect of the Capitol (AOC) is notified that a ceremony will occur, our team begins fabricating a wooden catafalque, a stand to hold the casket. Ceremonial stanchions are cleaned and polished, the floors of the Rotunda are buffed and waxed, stone entrances to the U.S. Capitol Building are power washed, and lamps and other lighting is checked.
The evening before the ceremony, which is hosted by congressional leadership, the AOC installs ceremonial stanchions, chairs, podium and media risers. A viewing queue is established and staffed within the Capitol Visitor Center and tables with condolence books put in place. Electrical and sound requirements are met and tested – including microphones on the podium and event lighting.

Historically, the body has remained in the Rotunda for a period determined by Congressional leadership. Usually, it's a day or two.

A Final Attempt at Healing

Ceremonies like lying in state are meant to "embalm an idea," according to anthropologist Shannon Lee Dawdy of the University of Chicago.

Whether that works, of course, and whether that lasts is often at question.

"It does tend to unite people. But any of these rituals often only do so for a short period, of course," Dawdy says. "You don't think back to JFK's funeral, per se, or him lying in state ... but the question of where you were when you heard that he was shot."

Still, lying in state and other death ceremonies — like state funerals or funeral processions — are important, even if their impact may be short-lived. They show that a nation can honor its best and that it can unite in doing so, that there is common ground to be found.

"We're in a very different national moment now. But some people hold onto those old ideas of honor and duty to nation, both within the military, but of course also in public service. And respecting the Constitution. So, I think that people who still cling to that idea of American democracy ... would be the most interested in seeing him honored this way."

NOW THAT'S INTERESTING
Lying in state (and in honor) is not done only in Congress, but in several states as well. Other federal dignitaries are honored in other ways. In the U.S. Supreme Court, for example, justices lie in repose in the Great Hall of the Supreme Court — often on the loaned Lincoln catafalque. The last to do so was Justice Antonin Scalia, on Feb. 19, 2016.