by Oisin Curran
Next
Chicago gangster Al Capone had a reputation for deploying unbridled violence in his pursuit of power. Public Domain/©HowStuffWorks

It was almost 10:30 a.m. Feb. 14, 1929, and Bugs Moran, bootlegger and gang leader, had overslept and was late for a meeting. He hurried along the sidewalks of Chicago's North Side with one of his henchmen, but as he neared the rendezvous spot — a brick garage at 2122 North Clark St. — he saw a cop car pull up. Retreating to a nearby café with his buddy, Moran decided that oversleeping might have been a very smart move, all things considered. He had no idea yet just how right he was.

Inside the garage, seven of Moran's men were waiting for their boss to show up when two beat cops and two plainclothesmen burst in announcing a raid. Armed with submachine guns, shotguns and a revolver, they ordered the gangsters up against the wall. Then, shockingly, they opened fire.

Ninety bullets later, Moran's men lay in a blood-soaked heap, and the gunmen were jumping into their black Cadillac for a clean getaway. But despite sporting a siren, gong and rifle rack, it wasn't a cop car after all, and its occupants definitely weren't cops.

To this day the gunmen have never been identified, and nobody ever took responsibility. But in the wake of this, the most infamous gangland slaughter of the Prohibition era, all fingers pointed at one man: Al Capone.

Who Was Al Capone?

Al Capone is one of those rare figures in American history who has, through the strange machinery of celebrity culture, arrived at the status of a synonym. His name means gangster. Or vice versa. But he was, in fact, a real person, with a real family and a real childhood and all the other things real people endure.

His father, a skilled baker specializing in artisanal pasta, found little American interest in his profession, and so he remade himself as a moderately successful barber. Within a few years, the Capones were established as respectable members of their community.

Young Capone was a quick study, smart and capable at school, especially when it came to numbers, but he had an inborn anti-authoritarian streak that got him into frequent trouble with his teachers. And back then, teachers had no time for difficult Italian kids. Italians had replaced the Irish at the bottom of the immigrant heap and were expected to be delinquent dropouts headed for low-skilled labor and/or criminal activity.

It's in the nature of such expectations to be met, and young Capone duly did so. He was expelled from school at the age of 14 for hitting a teacher, and he never went back. Meanwhile, he'd been cultivating a reputation as a street brawler and loyal partisan of Italian versus Irish kid-gang territorial disputes.

When Capone was a teenager, he was part of the notorious Five Points Gang in New York City.
Public Domain/© HowStuffWorks

Capone had more than a few nicknames, but the one that stuck fast was, of course, Scarface. In later life, he liked to claim that he'd acquired his wounds while battling in Europe during World War I. But the truth is that he never served a day in the military.

Instead, he harassed a young woman named Lena Galluccio in a bar when he was 18, and her brother, Frank Galluccio, went after him with a knife and sent him to the hospital where he required 80 stitches.

Before departing his teens, he'd attached himself to the notorious Five Points Gang and acquired a mentor in the form of a tough guy named Johnny Torrio. In 1919, Torrio was called to Chicago to work as an enforcer for James "Big Jim" Colosimo, and he took young Capone with him. They landed in the middle of a gang war and Colosimo was gunned down. Nobody was ever arrested for his murder, but many believe Torrio and Capone were both involved.

After Colosimo's murder, Torrio took over his position. But not for long. He retired immediately and handed the reins to his protégé, Capone who, at 26, became one of the youngest gang leaders in the country.

Young Capone's subsequent success had to do with a potent combination of managerial skills and ruthlessness, with a special emphasis on ruthlessness. There's a story that he invited a group of gang leaders to dinner and then personally bashed them to death with a baseball bat. The jury's still out on the veracity of this tale, but whether it's actually true, it's emblematic of Capone's reputation for deploying unbridled violence in his pursuit of power.

And it worked. While the St. Valentine's Day Massacre might not have eliminated Capone's Northside rival Bugs Moran, the slaughter effectively put the Irish gang leader out of business.

From 1925 to 1931, Capone reigned supreme over Chicago's underworld. He became quite popular, sponsoring soup kitchens and lobbying for safer health standards. But his fast-growing CV of horrors put him in the crosshairs of law enforcement. Local, municipal, state and federal authorities went after him from several different angles, but although they managed to jail him briefly and intermittently, they couldn't seem to dent his grip on power.

In the end, Capone's doom came from an unexpected direction. And it was all due to a brilliant lawyer named Mabel Walker Willebrandt. As America's first female assistant attorney general, she was tasked with enforcing Prohibition, the constitutional amendment that outlawed alcohol. This was a tricky business, as bootleggers often had politicians and law enforcement in their pockets, but Willebrandt came up with an ingenious, and ultimately far-reaching strategy.

Going after a crook named Manly Sullivan, Willebrandt decided to set aside his obvious criminal activity and instead prosecute him for not paying taxes on his income. Sullivan's defense that his income was illegal put him in a legal pickle, since he was admitting to wrongdoing in his effort to avoid conviction. Willebrandt shrugged this nonsense aside and pointed out that tax law required individuals to report and pay taxes on any and all income, regardless of its source. Check and mate.

Law enforcement officials realized that they could use Willebrandt's method to go after any number of gangland figures, including, or maybe especially, Capone. In the end, that's what took him down when the Federal Treasury got him sentenced to jail for 11 years for tax evasion. He also had to repay hundreds of thousands of dollars in unpaid taxes.

Jailed, at first, in Atlanta, he ended up being transferred to the infamous island dungeon of Alcatraz. The reason being that in Atlanta, Capone had been able to manipulate, con and bribe his way to a luxurious and privileged lifestyle. Alcatraz was an entirely different experience and, according to his warden there, Capone eventually admitted, "It looks like Alcatraz has got me licked."

Capone was released in 1939, but by that time he was a vastly diminished figure, having been debilitated by syphilis for years, a condition he'd contracted decades earlier. It would kill him in 1947, after a long decline at his Palm Island mansion in Florida.

Al Capone wasn't a mafia boss like Don Corleone or Tony Soprano with their strictly Italian underlings. In fact, his gang was quite ethnically diverse, a fact reflective of the cultural hurly-burly of his hometown. When called Italian, Capone would angrily respond, "I'm no Italian, I was born in Brooklyn!" 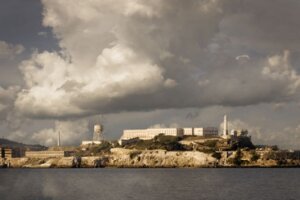 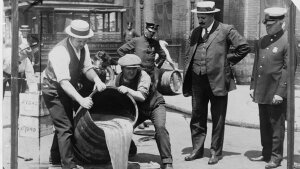 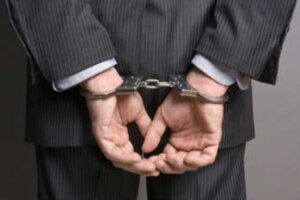