Why was tax evasion the only thing pinned on Al Capone?

Al Capone: MBA from the School of Hard Knocks 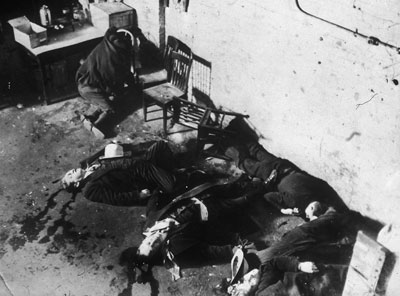 Despite (or perhaps because of) his vicious methods, Al Capone was a shrewd businessman. During a newspaper strike, the Chicago Tribune asked Capone to arbitrate to end the labor dispute. When he was finally convicted of a major crime, the murders and other illegal activities that comprised his business were conspicuously absent from the charges. So why couldn't the law pin anything more on him?

The short answer is that Capone was careful; the Treasury Department described him as possessing a "natural Italian secretiveness" [source: IRS]. He managed to create plausible deniability, removing himself enough from the violence and illegality so that no connections could be drawn between him and the crimes he authorized.

The St. Valentine's Day Massacre is a good example of this. Seven members of the rival Bugs Moran gang were slain. They were shot in the backs, deceived into thinking they were being arrested by police officers who were actually Capone underlings in disguise. Capone was at his beach house in Florida when the murders took place. What's more, he had a doctor's note saying he'd been bedridden at the time.

Capone was equally careful about keeping his illegal earnings hidden. He endorsed only one check in his lifetime, and he never had a bank account in his own name. With the exception of that one check (for proceeds from a gambling racket), Capone dealt exclusively in cash.

He was further protected by the fact that witnesses were unwilling to testify against him. There were, of course, more than enough people with knowledge of Capone's direct involvement in crime. But those close to him were loyal to Capone or feared death. And the residents, police and local prosecutors in Chicago felt the same way. Capone was liberal with both bribes and threats. In 1927, Capone spent an estimated $30 million in bribes alone to politicians, prosecutors, police and other city officials [source: Gumbel].

There were a few occasions when Capone was pinched. He served nine months for a concealed weapon charge in 1929. And in 1931, Capone was charged with contempt for his failure to appear in court in Chicago for questioning about the St. Valentine's Day Massacre.

Because a federal court issued the contempt citation, the FBI became involved in investigating Capone's activities. This led to an intense, years-long inquiry into his business practices with authorities building a paper trail and looking for witnesses who could testify to his crimes. The FBI worked in conjunction with the Treasury Department and the Internal Revenue Service to dig up dirt on the gangster. Eventually, they found enough to convict him. The check he endorsed, along with testimony from the very few witnesses the feds could persuade to testify, provided enough evidence to put Capone away.

He was ultimately found guilty of evasion for not paying taxes on his ill-gotten wealth. Capone was sentenced to ten years in federal prison and an additional year to be served at in Chicago.

While Capone served only seven years, the punishment had the effect of a life sentence. He contracted syphilis and suffered brain damage and insanity from the infection. The year before his death in 1946, Capone's intellect had degraded to that of a 12-year-old's [source: FBI].

Capone's conviction had another, unexpected effect: Criminals and legitimate citizens alike began to pay the IRS for back taxes. In 1931, the year Capone was convicted, more than $1 million in unpaid tax filings were submitted. That was double the amount of the year prior [source: Treasury Department].

For more information on crime and other related topics, visit the next page.