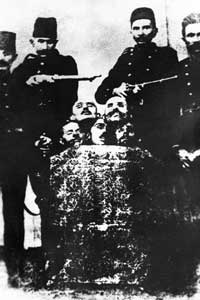 The stark image of a massacre: These were 1915 victims of the Armenian Genocide in Turkey. See more men of war pictures.
AP Photo

The Armenian Genocide is one of history's best-known genocides. It began in 1915, and before it was over, an estimated 1.5 million Armenians were dead [source: Armenian National Institute]. Though the exact figure is a matter of debate -- in incidents where vast numbers of people are killed, statistics are based on a range of estimates -- many Armenians lost their lives. Whether they were deported and succumbed to starvation and exposure, were tortured and massacred outright, or fell victim to the many privations and epidemics that ravaged the concentration camps, the fate of the Armenians was tragic beyond words.

The horrific brutality the Armenians suffered is unarguable, but the question today is this: Although the Armenian Genocide is often cited as the first of the 20th century, were the Armenians truly the first population to suffer the horrific fate of targeted genocide in the 1900s? A lot depends on who's answering the question. Experts don't always agree what constitutes a true genocide, and they weigh the factors of specific incidents in different ways.

The definition of genocide used in international law, though not favored universally, was adopted by the United Nations General Assembly in 1948 and took effect in 1951. It states five acts which, if committed against a national, ethnical, racial or religious group, are considered acts of genocide.

It's not just the people directly involved in committing acts of genocide that can be held accountable, however. Anyone who conspires, incites, attempts and complies in committing genocide is also considered punishable under the articles of the convention. The International Court of Justice rules on cases concerning genocide, such as the one brought against Serbia that concluded in 2007 with a not guilty verdict, although the court did declare that the 1995 Srebrenica massacre of Bosnians Muslims counted as an act of genocide.

With that definition in mind, on the next page we'll take a closer look at another dire occurrence that many people consider to be the actual earliest genocide of the 20th century.

The Dubious Honor Goes to... the Herero Genocide

At the turn of the 20th century, the Herero people, one the many Bantu tribes living in southwest Africa, watched as their territory was slowly swallowed up, shrinking the borders of their homeland. The loss of land was one of many objections they had to the German colonial rulers who had entered their territory and threatened their pastoral way of life. In an attempt to salvage the situation, they staged a secret uprising, attacking military posts and farms. They focused their attacks only on those with whom they had just grievances in the conflict -- avoiding women, children, German missionaries, colonists of different nationalities and rival tribes -- hoping to garner allies among others in the region.

The uprising began on Jan. 12, 1904. Farms were destroyed, forts were harried and some civilians were killed. What little the Hereros accomplished for themselves, however, would be extremely short lived. A new commanding officer charged with leading the colony's military forces -- Gen. Lothar von Trotha -- soon set foot in the territory. His presence spelled doom for Hereroland.

The Battle of Waterberg took place in 1904, with fighting lasting two days. However, the outcome of the actual combat was less important than von Trotha's strategy of troop deployment, because the Hereros were boxed in. Three enemy sides were strongly defended, the fourth less so. As it became obvious the battle was unwinnable, the surviving Hereros were forced to break free by way of the weaker path, the path which led into the brutal Omaheke Desert. Von Trotha pursued, ordering his troops to kill any who tried to flee the forced march or fell behind the main body in exhaustion. Once his quarry was trapped in the desert, von Trotha had his troops deny the Hereros access to water holes; later, he had those water holes poisoned. Hand-dug holes dozens of feet deep were later found in the desert wastes; desperate attempts to find water in the bleak landscape.

The situation only got worse -- von Trotha's stated goal was complete expulsion or annihilation. He had the edge of the desert fortified to keep the Hereros cordoned in the barren land. Throughout the ordeal, no prisoners were taken; young or old, healthy or infirm, weak or wounded, male or female. All were killed (or simply left to die) if encountered by patrolling soldiers. Sometimes, after what the Herero suffered at the hands of their captors, death was probably an escape. Eyewitness accounts preserve the horrors of the massacring.

Forced labor in horrendous concentration camps followed for those who survived the initial genocidal efforts. The death rates in the camps were staggering. Thankfully though, the story of the Hereros didn't end there.

After the Herero Genocide 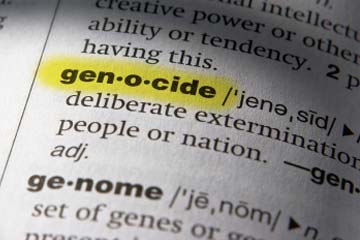 The overwhelming tragedy of genocide can't be properly conveyed in words.
©iStockphoto.com/kreicher

Von Trotha was not completely successful, however. Some Hereros survived his horrific campaign, but their tribe's numbers were decimated. And while casualty statistics are always subject to great debate, one proposed estimate puts the magnitude of the event into perspective. Out of an original 80,000 Herero people, only about 20,000 escaped von Trotha's death crusade alive; that's three quarters of the entire population, wiped from existence [source: A Century of Genocide].

While most experts concur that what happened in German South West Africa -- now Namibia -- was unquestionably genocide, some disagree. They argue, for example, that there were not enough casualties to qualify the incident as genocide, or that the intent of the military campaign was misinterpreted as an extermination attempt. Another factor is that von Trotha acted pretty much of his own accord -- the killings were largely not state-sanctioned and indeed, were protested by many.

But the disagreement over the word "genocide" seems of little import in light of the atrocities carried out against the Herero people. Episodes such as these continue around the world to this day with little justice delivered in return. For the Hereros themselves, even a modicum of validity was a long time coming. In 2004, Germany offered its first formal apology, finally admitting officially to the genocide on the 100th anniversary of its inception. However, the speech given by the German Minister for Economic Cooperation and Development, Heidemarie Wieczorek-Zeul, left many in attendance calling for a more direct apology.

A group of Hereros has also tried seeking financial compensation. They filed a lawsuit in 2001 against the German government and two German banks in U.S. courts, asking for $4 billion in damages, but the lawsuit is not expected to succeed. Two reasons frequently given are the age of the incident, and the fact that it predates the UN's 1948 Convention on the Prevention and Punishment of the Crime of Genocide.

To learn more about the violence that still plagues us in modern times -- and about those working hard to turn things around and bring about peace -- visit the links on the next page.