Acid in the Hands of the CIA: MKULTRA 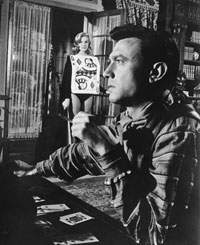 Laurence Harvey as Raymond Shaw, a former POW who's been brainwashed into an unwitting assassin in the 1962 thriller, "The Manchurian Candidate."
Hulton Archive/Getty Images

In 1951, the Central Intelligence Agency (CIA) received word from a military envoy that the Swiss drug company Sandoz Pharmaceuticals had 100 million doses of LSD, available to anyone who cared to purchase them. This "anyone" included the Russians -- people who, in the minds of the U.S. military and intelligence communities, were "10-feet tall" shady, powerful and unscrupulous [source: Grittenger]. In the hands of the Soviet Union, entire U.S. cities could be driven mad or made to revolt against the U.S. government from a water supply spiked with LSD.

The Russians, the CIA knew, were engaged in tests to find ways of undermining the behavior and personalities of regular people. They wanted to create a truth serum or learn to program everyday individuals into unwitting and involuntary assassins. So, too, did the Americans.

When the Sandoz supply became known, the United States moved to take it off the market. It turned out Sandoz had manufactured only about 40,000 doses. The United States bought them anyway. And with the LSD in their possession, military researchers and the CIA began conducting their own experiments.

In 1975, Congress held inquiries into the clandestine operation known as MKULTRA, the code name for an umbrella operation covering 149 subprojects. Most of these were involved with exploring new methods of chemical and psychological warfare. The Church Committee, the Senate group that held the inquiry, learned little about the details of the operations. The CIA maintained its standard silence -- files had been destroyed, new directors had no knowledge of old projects.

Two years later, the skeleton that was MKULTRA in the CIA's closet emerged entirely. A Freedom of Information act request filed by a journalist turned up several boxes of materials that escaped destruction but were overlooked during the Church inquiry. A second Congressional inquiry was held into MKULTRA in 1977. Information on 149 MKULTRA subprojects was unearthed -- from learning to deliver poisons using magicians' sleight of hand to electroshock therapy as a means of making an unwilling subject talk [source: Turner].

With the release of the newfound documents, dates, locations and names of unwitting participants in the CIA's experiments came to light. The names of some of the people who conducted these experiments were also revealed.

Dr. Sidney Gottlieb, a clubfooted stuttering scientist with a penchant for dancing, ran the technical division for the CIA. George Hunter White, a former Army Office of Strategic Services (the predecessor of the CIA) officer who'd reputedly killed a Chinese spy with his bare hands in Calcutta, directly oversaw the undercover acid tests for Gottlieb. Ike Feldman, a narcotics agent who posed comfortably as a pimp and racketeer, did much of the leg work at White's direction. Separately, but especially together, these three men filled out every inch of the shady public image of CIA operatives. They were the spooks of pulp fiction realized.

Most of the MKULTRA experiments were conducted under the scientific method with informed, willing test subjects at universities, CIA labs and independent research facilities. Some of these tests fell outside of the bounds of acceptable protocol: One study lured heroin addicts to participate as test subjects by paying them in heroin. Another studied the effects of LSD on black inmates in a prison. The experiments carried out by White and Feldman at Gottlieb's behest were less scientific. These resembled torture or a party, depending on how the subject reacted to the acid.