Did Benjamin Franklin really use a kite to discover electricity? 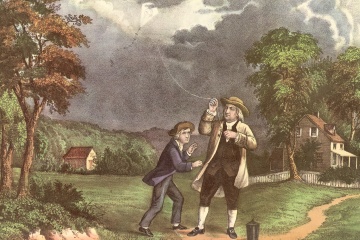 We've all been told that Benjamin Franklin discovered electricity by flying a key attached to a kite during a thunderstorm, but skeptics say that's highly dangerous and improbable.
Hulton Archive/Getty Images

Massachusetts-born Benjamin Franklin was an inventor, writer, printer, philosopher and one of the United States' founding fathers. In fact, he was the only person who put his signature on all of the new nation's documents, including The Declaration of Independence, the Treaty of Alliance with France, the Treaty of Paris and the Constitution. Plus, he was one heck of a kite flyer. He may even have used a homemade kite to discover electricity.

Can you imagine living or working without the aid of electricity? But in his day, few people gave it much thought. Many of Franklin's innovations are still relevant to modern life.

Franklin, however, was convinced that harnessing electricity could be useful and he was one of many scientists who were experimenting with it. Based on Franklin's casual observations of lightning, he became convinced that it was a type of electricity. He detailed this idea in a series of letters called "Experiments and Observations on Electricity," which he published in 1751 [source: Krider].

While Franklin waited impatiently for a church steeple to be constructed (from which he planned to conduct a lightning experiment) near his home, he came up with another, more accessible idea. In 1752, Franklin made a kite using two sticks, a silk handkerchief and string. At the end of the string, he placed a metal key in a Leiden Jar (or Leyden Jar) designed to store electrical charges [source: Code Check]. As the story goes, the kite was struck by lightning, which electrified the key and gave Franklin a shock. This proved to him that lightning and electricity were the same.

However, many people have raised doubts that the experiment actually happened that way. Some contend that Franklin knew that a lightning strike would be deadly. After all, he'd already detailed a lightning rod design in the "Experiments and Observations on Electricity" letters he'd written a year earlier. Franklin's letters clearly indicated he knew the dangers of lightning and the need for a grounding mechanism -- something that would have been absent from his kite experiment. The reality is that if lightning had struck the kite he was flying, it probably would have killed him.

It's far more likely that Franklin flew the kite as a thunderstorm was beginning to build. Because of the timing, he was able to reduce his risk of being hit by lightning, yet was able to capture enough of an electric charge to prove his theory [source: It's Not Magic, It's Science].