Did the Druids really build Stonehenge? 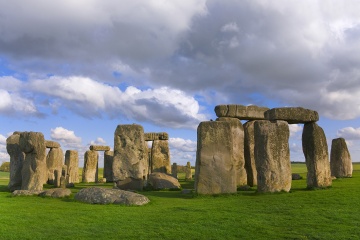 Stonehenge has been a marvel for thousands of years. Pinpointing it's origin hasn't always been easy.
© Keren Su/Corbis

Stonehenge, a monument constructed of gigantic rocks, stands atop a grassy plain near Salisbury, England. I visited it once, wondering about the ancient people who constructed it and hoping to feel a bit of its mystery. In the end, I bought a paper model in the gift shop and left the damp, windy site for a warm, dry pub.

The structure known as Stonehenge began taking shape about 5,000 years ago and is part of a larger complex. Some of Stonehenge's biggest stones tower 30 feet (9 meters) above the earth and weigh an estimated 25 tons (22.6 metric tons). A quick survey of the area reveals an absence of stones and trees. Experts contend these stones were transported from about 20 miles (32 kilometers) away, while other slightly smaller stones were brought from as far as 140 miles (225 kilometers) [source: Jarus].

Stonehenge may have served as a burial site, meeting place, solar calendar or sacred ritual, but it wasn't built as a Druid temple. Druids, a group of Celtic pagans, were long believed to have built Stonehenge and used it as a place of worship. At one point during the 17th and 18th centuries, groups of Druids did hold annual summer solstice ceremonies at Stonehenge, adopting the site as part of their history -- just as so many believed it to be. However, scholars believe Stonehenge existed long before the Druids, perhaps predating them by 2,000 years [source: History].

There were several groups of people who successively built Stonehenge. The first are known as the Windmill People, who dug deep furrows and built up great mounds of soil about 5,000 years ago. They used the site for collective burials --entombing their dead in stone-encased chambers. As the Windmill People died out, moved on or assimilated with nearby groups, the next wave of Stonehenge construction came from Beakers. Again, the site was used a receptacle for the dead, who were buried in mass graves. By about 1,500 B.C. the Wessex People became the final group to act as master builders. In fact, a stone carving of a bronze dagger was left as their calling card [source: Bradshaw Foundation].

In 1915, Stonehenge was purchased at auction -- the first and only time it was ever offered for sale -- for 6,600 pounds ($10,500) by a local resident. Sir Cecil Chubb believed it belonged to the people, so after a mere three years he handed the property over to the monarchy on the condition that the entrance fee never cost more than a shilling (about 5 cents) and that local residents got in free. Despite his wishes, the 900,000 people who visit Stonehenge each year pay 5 pounds (about $8) each [source: BBC].