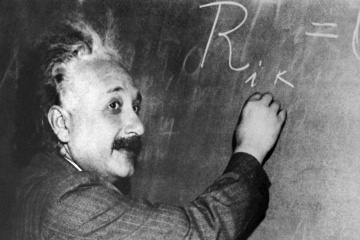 Geniuses aren't perfect, but they're pretty close. Are we sure Einstein was really bad at math?
AFP/Getty Images

In 1905, Theodore Roosevelt was inaugurated as the 26th president of the United States, Franklin D. Roosevelt married Eleanor and the World Series matched the New York Giants against the Philadelphia Athletics. And, for four glorious months, Albert Einstein authored four papers that changed our understanding of the way the universe works. He was only 26 years old.

The theories Einstein outlined in those papers, including the quantum theory of light and the theory of relativity, were all devised during his free time. Einstein's day job was examining patents in Bern, Switzerland, which didn't demand much mental capacity. It left him plenty of time to ponder the mysteries of the universe, which he did his best to solve on his own time [source: Levenson].

It was a pivotal chapter in the life of a self-driven learner, who didn't show signs of genius early on. Einstein talked at a much later age than other children and threw volatile temper tantrums. In fact, his development was so labored that his parents wondered whether he had a learning disability.

Einstein had trouble making friends and didn't excel in school. There's even a persistent, unfounded rumor that he flunked math in the fourth grade. The truth is, Einstein seemed to relish problem solving, and little else. He loathed the busy work of a typical school day and dropped out when he was 15.

After Einstein left school in Munich, he tried to enter college in Zurich, but flunked the entrance exam. That's where the myth that he failed math seems to most powerfully originate. While it's true Einstein failed the exam, he didn't fail the math portion. He did, however, bomb the botany, zoology and language sections.

Always a persistent -- if not successful -- student, Einstein hit the books, took the exam again and passed. Still, he remained a lackluster student throughout college. He skipped classes and angered professors because he preferred to study on his own. Einstein even had trouble getting a job after graduation because at least one professor wrote a scathing "recommendation" letter. In the end, a family friend stepped in and secured Einstein a desk job at the Swiss patent office [source: History].

It wasn't until Einstein developed the research papers that would become known as his "great works" that he became recognized by his peers, began to experience fame and, eventually, won a Nobel Prize for his work. This proves once and for all that his ability to perform mathematical equations wasn't really an issue [source: Biography].