Evita's Preservation and Preparation for Travel 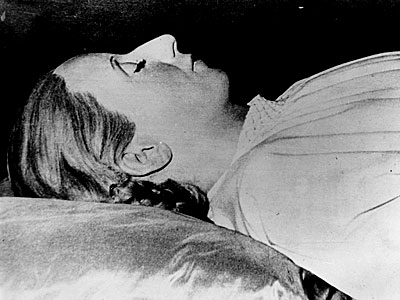 As soon as Eva Peron's death appeared imminent in July 1952, Juan Peron summoned Spanish pathologist Dr. Pedro Ara. Ara was commissioned with the task of embalming the first lady's corpse, and to ensure the highest-quality embalming, he had to begin the process within hours after her death. While Ara prepared the body for lying in state, Eva's hairstylist dyed her hair blond one last time, and her personal manicurist painted her fingernails with clear polish. Unlike most embalmed corpses, Ara left Eva's internal organs intact.

Those 13 days of exposure during the public visitation worried Ara because he hadn't yet prepared the corpse for permanent preservation. Afterward, a military convoy transported the body to a guarded room at the headquarters of the National Confederation of Labor. There, Ara commenced to mummify Eva Peron's body, pumping it full of alcohol, glycerin and preservative chemicals and sealing the skin with a plasticlike film. Accounts of people who later saw and touched Eva's embalmed corpse marveled at its softness and its petite size, which likely resulted from the drastic weight loss caused by the cancer. Testifying to Ara's meticulous handling of the corpse, it took a year to embalm it completely, costing the government a reported $100,000 [source: Quigley].

By that time, Juan Peron's government was on the verge of collapse. The postwar industrial boom spurred a vast migration of workers from the plains into the cities, giving way to sprawling slums. Drought sapped the country's wheat supply, which hurt cattle production as well. Without ample supply of those commodities to trade for natural resources, such as coal and oil, the economic infrastructure was crumbling, and unemployment was on the rise [source: Barnes].

In 1955, an anti-Peron military group led by Gen. Pedro Eugenion Aramburu overthrew Peron's government, and Juan Peron was exiled to Spain. Following the coup, the revolutionaries sought to destroy all signs of the Perons' tenure, including the early stages of Eva's burial monument.

The corpse, which was still under Dr. Ara's obsessively diligent care, posed a particular problem for the military leaders. If the pro-Peron factions got their hands on Eva's corpse, they could use it to rally the masses against the new government. Even in death, Evita's cult of personality remained a potent political force.