Stripping Away the Layers of Lady Godiva Lore 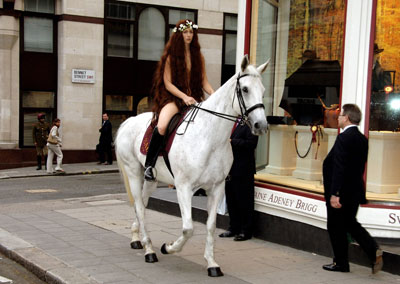 A modern Lady Godiva makes her way down a London sidewalk. This Godiva is clearly a redhead, but historians don't know if Godgifu had red, blond or brown hair.
Dave M. Benett/Getty Images

Many conflicting legends have masked the real Godiva for centuries. To begin with, "lady" wasn't even her title. In 11th-century Anglo-Saxon England, that title was used exclusively to refer to the queen. The best comparison we can make to her noble status is countess, but that term didn't exist during Godiva's lifetime. Instead, she would've been addressed as "the earl's wife," or "the earl's bed-partner." Given that her husband's name was Earl Leofric, this title translates to Leofric eorl and his gebedda [source: Donoghue].

As if mistaking her title weren't a bad enough historical transgression, we've actually been calling her the wrong name. Born sometime between 979 and 1016, the noblewoman's name was Godgifu, which means "good gift." Some sources refer to her as Godgiva, and she eventually became known as Godiva. Around 1035, Godgifu married Leofric, Earl of Mercia. He was a pretty powerful man. The region of Mercia was at the very center of the island we know as modern-day England, and it was just across the way from Wales. Leofric's authority radiated from nearly every cardinal direction to influence people all across Anglo-Saxon England.

But Godgifu was no slouch herself. She came into the marriage with a considerable amount of wealth -- and eight countries that she called her very own. One of these was Coventry, the site of her legendary horse ride. (We'll return to that momentarily.) Under Anglo-Saxon laws, women were entrusted with keeping their household valuables and finances secure. Godgifu took very seriously the matter of managing her wealth. She and Leofric were also philanthropic and the primary benefactors of monasteries in their domain. Godgifu gave generously to the Benedictine abbey in Coventry in 1043, offering gold, silver and gems that were fashioned into crosses and bookplates. Given the nature of historical records from the Middle Ages, we don't have many details about Godgifu's personality but can infer that she was very pious [source: Stephens].

Leofric was an enthusiastic supporter of his wife's philanthropy. But according to some accounts, his staunch refusal to lower taxes for the citizens of Coventry was the basis for Godgifu's famous ride. The first version of the Lady Godiva legend appeared in the 13th century, nearly 200 years after her death. Roger of Wendover, a Benedictine monk and historian from St. Albans, wrote in the 1057 entry of his Chronica that the "Countess Godiva" asked Leofric to abolish the rather sizable tax demanded of Coventry's citizens. Leofric said no, but Godiva persisted until he gave in -- nearly. He promised to repeal the tax if Godiva would ride naked on her horse through the market and back. Godiva didn't flinch at the suggestion; she just ensured that she had Leofric's permission to complete the challenge. Then she undressed, let loose her long hair and arranged it over her body to cover herself. With her hair as a veil, she rode through the town and back without being seen. When she returned home, Leofric kept his promise and signed a charter, thereby freeing Coventry's citizens of the tax [source: Roger of Wendover].

The reverent noblewoman risking her reputation to protect the town's citizens makes for a powerful story. Too bad it's not true. On the next page, we'll take a closer look at the story and see why historians have discounted it.