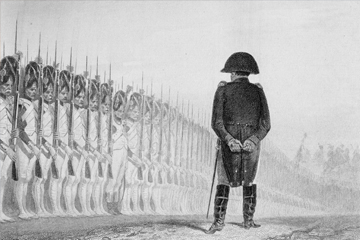 Napoleon wasn't the tallest, but he wasn't terribly short, either.
Hulton Archive/Getty Images

The sunshine-colored desert goby doesn't look like Australia's toughest fish. The males are small homebodies who watch over egg-filled nests in spring-fed pools. Yet scientists have pinpointed a behavior in these fish that's long been attributed to short-statured men. The smallest of the desert goby males seem to have a "Napoleon complex" that makes them quick to attack larger males. The idea behind the ferocity, believe scientists, is that when the smaller males act quickly and aggressively, they scare off bigger competition before that competition can even size them up [source: Svensson].

It's the animal kingdom's version of a colloquial term used to describe vertically challenged men, who are stereotypically quick to start fights because they feel inferior to their taller counterparts. The name comes from the French general Napoleon Bonaparte, who was believed to have compensated for his lack of height with a bellicose personality.

There's just one problem: Napoleon wasn't really short. At the time of his death, he measured 5 feet 2 inches in French units, the equivalent of 5 feet 6.5 inches (169 centimeters) in modern measurement units. The confusion stems from the French and British measurement systems used at the time of Napoleon's reign, which used the same terms even though the actual measurements varied.

Napoleon was of average height, but his battle strategies may have earned him a reputation for being short. Apparently Napoleon preferred to surround himself with very tall soldiers, and these members of his personal guard made him look short-statured in comparison. He's also said to have been mean-spirited, a character trait that could have have fueled his quarrelsome reputation. Napoleon had a habit of spilling ink or food on women's clothing when he didn't like the cut of their cloth, making him one of the earliest members of the fashion police. He also severely restricted the rights of women [source: National Gallery of Victoria].

While the idea that Napoleon was shorter than average is clearly a myth, the use of the term "Napoleon complex" endures. It may not be fully applicable to humans, but researchers are discovering it's quite prevalent among animals where conflicts frequently arise over resources and mates. For example, if resources are scarce, smaller males have more to gain by attacking larger males. Even if the smaller animal only has a 50-50 chance of winning, it takes those odds.

If resources are abundant, however, all bets should be on the little guy. Small animals are still more likely to attack larger ones, and the Goliaths are more likely to retreat because they know they can seek alternative resources elsewhere [source: Morrell]. Maybe there's something to the Napoleon strategy after all.