Browse the article Who was the real Count Dracula? 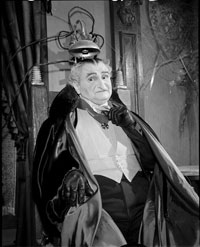 The popular conception of Dracula runs the gamut from horrific vampire to comic relief (like Grandpa on the TV show "The Munsters").
CBS Photo Archive via Getty Images

It wasn't until he came across documents during his research at the British Museum that novelist Bram Stoker found the man who would serve as the perfect foundation for his classic gothic horror character, Count Dracula [source: Kent State University]. Vlad Tepes (pronounced te'-pish), a 15th-century prince from the dark, forested mountains of Eastern Europe was his inspiration.

­Accounts of Vlad Tepes' cruelty have been distorted throughout history, and Stoker's adaption seemed to help perpetrate these distortions. The prince was bestowed with the surname "Tepes" ("Impaler") based on his fondness for impaling victims. It was his father from whom he proudly took the name "Dracula" ("Son of the Dragon"). Tepes was no vampire, although one historic account details how he drank a victim's blood [source: West Grey Times]. And Tepes certainly wasn't immortal (it's unclear how he died), as Stoker's count is.

But Stoker wasn't just inspired by the prince's name. Tepes' reign was a cruel and bloody one.

When investigating sensational history, it's easy to find grossly exaggerated tales that obscure the facts. In the rare case of Vlad Tepes, little exaggeration is needed. Tens of thousands of people were tortured, maimed or died by his hand or command [source: University of Louisiana]. This isn't in dispute -- it's accounts of Tepes' motives where distortion tends to emerge.

As the prince of Wallachia, a region in Romania, and a defender of Christianity against the Muslim Turks, Tepes made many powerful enemies. His enemies spread propaganda about the ruler, which inadvertently assured Tepes' place in history. Tepes' deeds and atrocities made such an impression, in fact, that an unflattering epic poem about him was published on the Gutenberg printing press just eight years after the same moveable type was used to print the first Bible [source: Mundorf and Mundorf]. Had his detractors not campaigned against him, generating publications that survive today, Tepes' legacy may have been lost.

So who was this man? Was Tepes as bloodthirsty in real life as his fictional counterpart is in movies and books? The short answer is yes -- even more so. Read about the real Dracula on the next page. 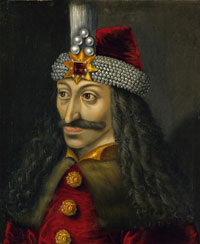 Bram Stoker's fictionalization of Vlad Tepes spurred scholarly research into the real man. Research has attempted to show the motives for his murderousness. Tepes desired a unified Romania -- free from the outside influences of Germany, Hungary and the Turks.

His consolidation of local power was harsh. On Easter Day, 1456, Tepes invited regional nobility to dine with him. Following the meal, he had the old and infirm murdered and marched the remaining guests 50 miles to a dilapidated castle, which he took as his own. There, he put the nobility to hard labor restoring it. Most died during from maltreatment and exhaustion; those who didn't were impaled alive on spikes outside the castle when restorations were complete [source: Carroll].

Vlad's father, Vlad Dracul, ruled Wallachia from 1436 to 1442, was unseated by his countrymen and regained the throne from 1443 to 1446. Vlad Tepes served in the same position from 1456 to 1462 [source: Tacitus]. When he was inducted into the Order of the Dragon, a secretive organization of Christian knights, he took the name "Dracula." The name would be replaced by the nickname "Tepes" from those who feared and hated him.

Vlad Dracula's social ideologies were contradictory. He wanted to be remembered as a saint -- he murdered a Catholic monk who denied that Tepes would be canonized (sainted) [source: Carroll]. Yet his behavior was hardly saintly. Having come to view destitution as a scourge on his domain, Tepes invited his poverty-stricken subjects to dine with him. At the end of the dinner, he had the dining room locked, and his guards set fire to it, killing those inside [source: Marinari].

His foreign enemies suffered equal (if not worse) fates than his subjects. For four years, Tepes and his younger brother were imprisoned by Turks after their father sent them as tribute to the sultan Mehmet. Tepes' father had become a puppet leader of Wallachia for the Turks, and his sons were imprisoned to guarantee their father's continued loyalty [source: Fasulo]. Tepes was meant to become a future puppet leader like his father. But rather than keep allegiance to the Turks, he resolved to fight them.

When he became prince in 1456, Tepes took strides toward Romanian independence. He developed biological warfare, sending subjects disguised as Turks, stricken with infectious disease, to live among the armies in their camps [source: Marinari]. For those Turks who survived, when they invaded the capital of Wallachia, Tirgoviste, they found a forest (about one-half mile by two miles in dimension) made entirely of corpses of captured prisoners impaled on spikes. The invaders left quickly [source: Carroll].

Impalement, the method of execution that gave Tepes his name, is an extraordinarily painful way to die. Tepes ensured maximum pain when he impaled his victims by rounding the ends of spikes and oiling them to reduce tearing. Spikes were introduced into the victim's anus and pushed in until the other end emerged from the victim's mouth. The impaled victim was then hoisted vertically, and left to writhe in agony, sometimes for days [source: Fasulo].

The aged vampire in Stoker's novel required blood to stay alive; Tepes shed blood by the bucketful to promote his lifelong goals. Conservative estimates put his victim count at 40,000 [source: University of Louisiana]. It's also significant to note that eating and death were so intertwined in Tepes' life. He often dined with guests before killing them, and he was reputed to have taken meals outdoors, among impaled dead and dying [source: Martin]

Why is blood such a significant symbol of vitality and power in fiction, allegory and reality? Find out about the symbolism of blood on the next page. 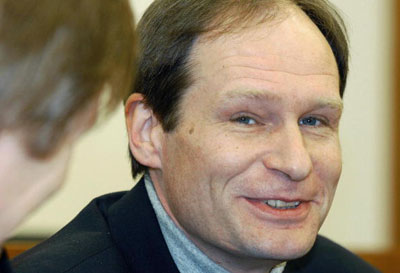 Cannibalism is associated with madness in the modern, developed world. German Armin Meiwes was convicted of manslaughter for killing and eating another, willing human.
Uwe Zucchi/AFP/Getty Images

Most Christians wouldn't infer vampirism from the story of the Last Supper. Christ offers the chalice containing wine to signify his blood to his disciples and directs them to drink it. But there is a parallel between the Eucharist and vampire legends: Both suggest that the consumption of blood is an act of obtaining vitality.

Christ told his disciples he'd shed his blood for their forgiveness. By drinking it, they were taking part in his everlasting divinity. Similarly, through ingesting the blood of others, vampires of lore may live eternally here on Earth.

According to some sources, blood is also reputed for its mythic ability to maintain beauty. When Bram Stoker's fictional Dracula fed on blood, his appearance reverted to a handsome, youthful version of himself. The 16th-century Hungarian countess Elizabeth Bathory is said to have used the blood of her murdered victims to promote her skin's health. Some Renaissance-era women believed applying the blood of doves to their skin could maintain beauty [source: McNally]. And even today, some women apply rouge or pinch their cheeks to create the appearance of a healthy flush.

Instances of nonritual cannibalism also produce vitality. Perhaps the most famous case of cannibalism took place in 1972, when an airplane carrying the Uruguayan national soccer team crashed in the Andes Mountains. Several members were left alive and resorted to cannibalizing their dead teammates to survive for more than two months [source: Walton].

It appears our ancestors took some time to develop mores -- cultural restrictions -- against cannibalism. Evidence of anthropophagy as recent as around A.D. 1100 has been uncovered at Anasazi settlements in the Southwestern United States [source: Melmer]. And genetic researchers have found a gene variant spread among humans throughout the world that suggests we descended from cannibals [source: BBC].

Vampire legends, then, may be allegories for real-life monsters -- perhaps like Vlad Tepes -- that have refused to honor the sacred taboo against consuming the vitality of other humans

For more information on vampires and other related topics, visit the next page.