Did Medieval People Drink Beer Instead of Water? 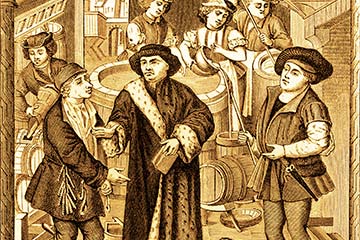 The 15th century bishop of Tournai is shown receiving a tithe of beer from tenants on his lands. Beer was commonly used to pay taxes and tithes in the Middle Ages.
Culture Club/Getty Image

Visit a medieval festival and you'll witness all manner of period-friendly sights: maidens in flowing gowns, knights brandishing weapons and, often, a celebratory feast -- complete with goblets of beer and refills at the ready.

Of course there's beer -- it's a re-creation of medieval times, after all, a period not known for clean water and disease control. And it's a time when people imbibed brewed concoctions out of necessity as much as enjoyment, right? Water in the Middle Ages was polluted, full of bacteria and, frankly, not fit to drink. This forced everyone -- from commoners to royalty -- to hydrate by way of beer. Except that they didn't.

The idea that people primarily drank beer throughout the Middle Ages is widespread -- and also wrong. A number of records from medieval times report that water was plentiful and common. One account by Gallo-Roman historian Saint Gregory of Tours mentions a boy so religious that he primarily drank water, (like many devout at the time). Gregory also mentions a traveler in the sixth century who asked a villager for water. In another story, there were telltale marks where a hermit had knelt to drink from a river. Sometimes water was mixed with wine or sweeteners like honey, and a 14th century monk once listed water as a beverage preferred over beer. Water, it seems, was on everyone's lips [source: Chevallier].

Water also was free and clean. Whether from a well or fresh stream, it was the centerpiece of villages. In larger towns there were even infrastructures to supply water to citizens. In 1236, construction of a system of pipes began in London. It was designed to move water from a fresh spring to a pumping house that would, in turn, make fresh water available at cisterns throughout the city. Medieval people weren't stupid; they didn't drink water that looked or smelled bad, and tradesmen that used water -- such as tanning -- faced hefty fines if they polluted the town's drinking supply [source: O'Neill].

Beer may not have been a replacement for water, but it was viewed as a more nutritious alternative than water. Even though it was weakly brewed from barley, at the time beer was a calorie-laden beverage that pulled double-duty with workers and farmers who were thirsty and in need of energy. In the end, it would still have been more costly to drink than water. Unless home-brewed, beer had to be purchased, and like wine, there often were taxes and transportation fees involved [source: O'Neill].