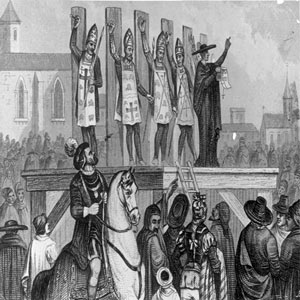 Believe it or not, this quasi-crucifixion was one of the tamer punishments dealt to heretics in the 15th century.
Hulton Archive/Getty Images

­The period known as the Middle Ages stands out as one­ of ­the most violent eras in history. This epoch, lasting roughly 1,0­00­ years, from the 5th century to the 15th­, was a time of great inequality and brutality in much of Europe.

What really sets this time apart is the ghoulish inventiveness that gave rise to a plethora of torture methods. There were many grounds for torture during the Middle Ages -- religious fervor and criminal punishment come to mind -- but why would a person take the time to invent a device designed to maim?

In his 1975 b­ook "A History of Torture in England," L.A. Parry attempted to explain this bizarre phenomenon:

­"...What strikes us most in considering the mediaeval tortures, is not so much their diabolical barbarity … as the extraordinary variety, and what may be termed the artistic skill, they displayed. They represent a condition of thought in which men had pondered long and carefully on all the forms of suffering, had compared and combined the different kinds of torture, till they had become the most consummate masters of their art, had expended on the subject all the resources of the utmost ingenuity, and had pursued it with the ardour of a passion."

In this article, we will explore a collection of the most heinous torture devices ever invented. We begin on the next page.