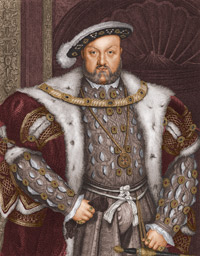 During the reign of Henry VIII, between 1509 and 1547, a­n estimated 57,000 [source: The Tudors] and 7­2,000 [source: Historic Royal Palac­es] English subjects lost their heads. It was a violent time in history, but Henry VIII may have been particularly bloodthirsty, executing tens of thousands during his 36-year reign. By comparison, the daughter who succeeded him on the throne, who came to be called "Bloody Mary," killed fewer than 300 people during her six years as queen.

Perhaps one of the primary reasons for Henry VIII's notoriety is not the sheer volume of killings but, instead, the controversy surrounding them. Henry VIII presided over the English Reformation, a period of great change characterized by England's break from the Catholic Church. The trouble started when Henry married his older brother's widow, Catherine of Aragon, a member of the Spanish royal family.

After years of marriage, Henry wanted to divorce Catherine. She had suffered through several still births and a handful of infant deaths and hadn't borne a son. Henry became obsessed with producing an heir to carry on the Tudor family lineage, and he finally convinced himself that his marriage to Catherine had been a sin in the eyes of God. He even believed the union's sin was the reason why his legitimate male children kept dying. So he set about obtaining an annulment from the church based on the edict stating that a man can never marry his brother's wife. The problem was, it was the pope who had sanctioned the marriage in the first place, on the basis of Catherine's oath that her marriage to Henry's brother was never consummated.

­What ensued was a political and religious fiasco. In the end, Henry cast out the Catholic Church and established himself as the head of the Church of England, God's representative on Earth. He divorced Cath­erine and married his mistress, Anne Boleyn, in the hopes of getting a son. In the process of achieving this single goal, Henry ordered the beheadings of some of the top political minds of the day, a few cardinals of the Church, at least one nun, a couple of his six wives, and countless members of the royal court who questioned the purity of his motives.

Of course, with tens of thousands of heads rolling, people were executed for a wide variety of crimes. In this article, we'll look at ten of the most significant executions of Henry's reign, beginning with the beheadings he ordered immediately upon securing the throne. As one of his first acts as king, Henry ordered the executions of two of his father's top advisors, the notorious Dudley and Empson.