by Ed Grabianowski
Prev NEXT
8 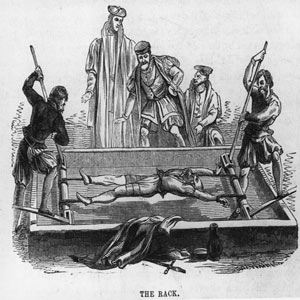 Protestants were regularly tortured and martyred for their religious beliefs.­
Hulton Archive/Getty Images

The rack was used throughout Eu­rope for centuries. It came in many forms, but here's the basic idea: The victim is tied down while some mechanical device, usually a crank or turning wheel, tightens the ropes, stretching the victim's body until the joints are dislocated. Continued pressure could cause the limbs to be torn right off. Such torture was known as being "broken on the rack," "racked," or "stretched on the rack." It could be combined with other forms of torture to make things even more painful. In one story, a Christian youth was tied to a wheel and his joints destroyed by the stretching. A fire was lit beneath the wheel, adding to the torture. Eventually, the fire was extinguished by the downpour of blood as the victim's limbs were torn free [source: Gallonio].

One type of rack was known as the Horse. It was a wooden device that vaguely resembled an actual horse in shape. The victim was tied to a beam on the top (the horse's "back"), facing up. Pulleys below tightened ropes affixed to the victim's hands and feet. He or she was stretched until his or her joints dislocated, then left there or slackened and allowed to hang underneath the horse while an inquisitor or judge questioned the victim and tried to get a confession [source: Gallonio]. Torquemada, the infamous torturer of the Spanish Inquisition, was known to favor a stretching rack known as a potoro [source: Goldberg & Itzkowitz].