by Ed Grabianowski
Prev NEXT
6 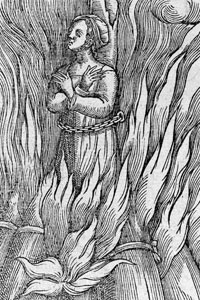 The simplicity of burning heretics at the stake apparently wasn't enough, as torturers sought to add more "fun" elements to the proceedings.
Time & Life Pictures/Getty Images

Bein­g burned at the stake was usually the last stop for torture victims, because this form of torture was invariably fatal. Conceptually, it's a very simple process -- create a pile of dry wood with a stake at the center to tie the victim to, and then light it. The fire does all the work. It usually took about a half an hour before the victim lost consciousness, but if it was windy and the fire was blowing away from the victim, he or she might have to endure up to two hours of being slowly burned to death [source: Bachrach]. Since the victims had usually been previously tortured with the rack or some other method, the pain must have been unimaginable. Despite the horror of simply being burned at the stake, the torturers of the Inquisition in the Netherlands developed a particularly cruel twist: Prior to being tied to the stake, the victim's tongue would be sandwiched between two hot iron plates. The scorched and swollen tongue would only allow strange, muffled screams of pain once the burning began, which supposedly added a great deal to the audience's entertainment.

The cruel irony of the Inquisition's practice of burning people at the stake was that it happened whether you confessed or not. Once accused of heresy, you would almost certainly be consumed by fire. However, if you confessed, you would be strangled to death before the fire was lit, supposedly sparing you the agony. This practice didn't die out at the end of the Middle Ages, however. Both women and men accused of witchcraft were burned at the stake in England, France and other locales well into the 17th century.