by Ed Grabianowski
Prev NEXT
4 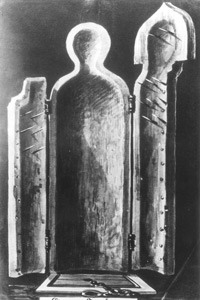 Don't you wish this was fictional?
Hulton Archive/Getty Images

­The Iron Maiden is a device so fiendish it was once thought to be fictional. It's an upright sarcophagus with spikes on the inner surfac­es. Double doors open on the front, allowing entrance for the victim. In one example, eight spikes protruded from one door, 13 from the other. Once the victim was inside, the doors were closed. There, the strategically placed spikes would pierce several vital organs. However, they were relatively short spikes, so the wounds wouldn't be instantly fatal. Instead, the victim would linger and bleed to death over several hours [source: Kellaway]. To add to the abject horror of it all, two spikes were positioned specifically to penetrate the eyes.

In the 1800s, researchers found one in a castle in Nuremberg, Germany, and documented proof of its use later surfaced [source: Innes]. For this reason, this device is sometimes known as the Iron Maiden of Nuremberg [source: Farrington]. Other names included The Virgin and, in German, Jungfer. A variation found in Spain was made to look like the Virgin Mary, and had machinery that, when manipulated, caused her to "hug" the victim close to her spikes [source: Innes].