by Ray Glier Dec 6, 2019
"The Battle of Atlanta" cyclorama has gone through many updates, but none quite like the one performed in the late 19th century, which attempted to rewrite the history of the Civil War. Jason Hales/Atlanta History Center

General William Tecumseh Sherman stomped through the U.S. South in 1864 marching his Union army across Georgia to the Atlantic Ocean. He demoralized the South and wreaked havoc on the Confederate supply chain in one of the most decisive campaigns of the Civil War.

But Gen. Sherman lost the Battle of Atlanta. That's what a 19th-century Georgia promoter wanted people to believe, anyway, and he used a spectacular piece of artwork, "The Battle of Atlanta," to try to spin the Confederate's loss into a win.

Who Was Paul Atkinson?

His name was Paul Atkinson. Atkinson was a marketing maven and the son of a Confederate soldier. He purchased "The Battle of Atlanta" cyclorama in 1891 and "reinterpreted" several scenes to then promote the painting as a win for the Confederates. Atkinson was so bold he even took out an advertisement in the Atlanta newspaper in 1892 urging people to buy tickets to come see the painting that proved the valor of the Confederate soldiers in a win.

The historic battle was not a Confederate win, of course. It was a rout ... for Sherman and the Union. Atlanta was practically burned to the ground. But Atkinson got away with his ideological spin for decades with the help of bitter Southerners clinging to the Lost Cause, an ideology that permeated the South that the Civil War was fought to preserve its culture, not slavery.

"He didn't do much, but he did just enough to the painting to get away with saying things like 'this was a Confederate win,'" explains Gordon Jones, the senior military historian and curator at The Atlanta History Center where the cyclorama is currently housed.

The Battle of Atlanta Cyclorama

Cycloramas were hugely popular in the 19th century. These massive pieces of art were typically housed in big buildings so viewers could stand on platforms and be completely surrounded by the art. The paintings' horizons were at eye level and skylines were painted to achieve depth of field, and lower portions sometimes incorporated physical items as part of ground-floor dioramas. This helped achieve an overall 3D effect.

The story of "The Battle of Atlanta" cyclorama began when the American Panorama Company commissioned a team of 17 German and Austrian painters in Milwaukee to create the massive painting (it's 49 feet tall, 371 feet long and weighs 10,000 pounds [19.9 meters tall, 113 meters long and weighs 4,535 kilograms]) as a tribute to Union veterans. The painters traveled to Atlanta, made sketches of the landscape where the center of the Battle of Atlanta took place and interviewed Union survivors. The cyclorama was painted in 1885 and premiered in 1886 and attracted large, adoring crowds in Minneapolis, and then Indianapolis.

The painters were instructed to take the battle on July 22, 1864 and freeze it for history. This part of the painting shows a fierce fight on the rail line just outside of Atlanta that had not yet turned into victory for the Union. The Union had set up a trench line but the Rebels had broken through. There were skirmishes and bayonets flashing and horses mortally wounded. There were heroic figures on both sides.

Jones says the painting was purposely created in a way that showed drama, a fight yet to be decided. But by 1890, the entertainment value of "The Battle of Atlanta" cyclorama had worn off in the North and the owners declared bankruptcy. In stepped Atkinson, whose four brothers fought in the Battle of Atlanta, along with their father. Atkinson had been too young to fight, but in the painting he saw a way to memorialize his family and the South. He bought the cyclorama at a distressed price and moved it to Chattanooga, Tennessee ... and rewrote history.

This part of the painting shows a fierce fight on the rail line just outside of Atlanta that had not yet turned into victory for the Union.
Jason Hales/Atlanta History Center

Because the original creators didn't paint the battle in a way that showed a decisive win, Atkinson was able to use that to his advantage. He hired his own team of painters to make a few simple changes that turned the entire narrative around. In one scene that depicts captured Confederates in gray being taken prisoner by Union soldiers in blue — and a Union soldier holding a crumpled Confederate flag — his team simply repainted the soldiers' uniforms. The imprisoned soldiers were now in Union blue and being herded by Confederate Rebels.

And that Confederate flag in the hands of the Union? "That was an insult to the South," Jones says. So that scene was merely painted over.

Atkinson's skill as a promoter did the rest to spin this new narrative. He moved the painting to Atlanta in 1892 and by the time it opened, the Atlanta Constitution newspaper proclaimed it "The only Confederate victory ever painted."

Many Southerners, still bitter over the war, embraced Atkinson's painting, Jones says, because it proved the South had fought valiantly to preserve its way of life. The cyclorama became a monument, just like the other statues popping up in the South, to revered Confederate leaders.

And while this new story stuck with many people, the appeal of the cyclorama as an entertainment attraction did not. Crowds thinned in Atlanta, just as they had in the North. On Nov. 15, 1892, in a last desperate attempt to make money, Atkinson ran another advertisement in the newspaper again proclaiming a Southern win, but his "show" was bankrupt by the end of the year.

The cyclorama also lost its marketing appeal, but not its ability to incite nostalgia for the South. For decades it continued to remain a symbol of the Lost Cause. But that was also part of its downfall. Jones says many Southerners did not embrace this spin. "When you read the painting and see identified Union leaders, but you don't see one identified Confederate leader, it can be pretty obvious what's going on," he says.

Eventually Atkinson sold the painting to Ernest Woodruff who immediately resold it for a small profit. "The Battle of Atlanta" was finally moved to Grant Park in Atlanta where it remained until 2014.

Restoring The Battle of Atlanta

By 1934, then-Atlanta Mayor William Hartsfield co-opted the epic painting for his own use. He commissioned historian and painter Wilbur Kurtz to restore the painting to its original form as part of a branding campaign for the city.

Hartsfield's message was "Here is how we suffered, here is how we have risen from the ashes." The mayor declared the painting showed the valor of both sides — the North and South — and it was time to come together.

Kurtz researched original drawings from 1885 and 1886 and discovered Atkinson's edits. It was Kurtz who repainted the Union soldiers back in command of captured Confederates. Once again, a Union soldier had firm grasp of a captured trophy, the Confederate flag. And just like that, the North won "The Battle of Atlanta." Again.

But it would take another monumental, $35.8 million effort in 2014 to restore the painting again. The Atlanta History Center took the lead and acquired the painting from the City of Atlanta to restore and reinterpret the painting, Jones says.

"You've got this wonderful artifact with this wonderful rich, deep history that can tell you a whole lot about the nation's history and Atlanta's history and the history of race, and those stories are not being told," he explains. "Let's treat it as an artifact and learn from it. We don't have to make up stuff. Let's be honest and tell people the truth. That's what they expect out of a museum."

The $35.8 million campaign included moving the painting from Atlanta's Grant Park to its own specially-built rotunda at the Atlanta History Center. The History Center used a multitude of resources to interpret the painting — in the context of the Battle of Atlanta, the Civil War, the role of slavery, reconstruction and how they all divided the country. Today "The Battle of Atlanta" is just one of two cycloramas from that era on display in North America. The other is "The Battle of Gettysburg" in Pennsylvania.

But the value of "The Battle of Atlanta" cyclorama goes well beyond money and making it an epic attraction again. The real value may be a lesson in how Americans can interpret, and freestyle with facts, to satisfy their own view of the world.

Today the massive "Battle of Atlanta" cyclorama is housed in its own specially-built rotunda at the Atlanta History Center.
Jason Hales/Atlanta History Center
Now That's Funny
Historian Wilbur Kurtz added plaster figurine models at the base of the painting to give it a 3D look and more appeal. When the epic "Gone With the Wind" premiered in Atlanta, Mayor William Hartsfield took actor Clark Gable on a tour of the cyclorama. Soon after, at Gable's request, there was a diorama figurine of his character, a dying Rhett Butler, added to the scene at the base of the painting. 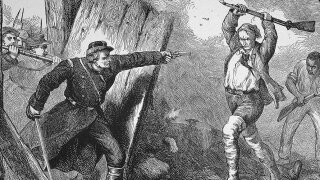 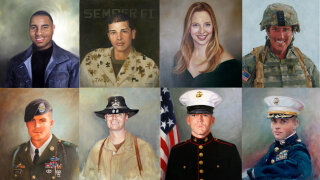 Art From the Heart: Portraits of Honor and Love 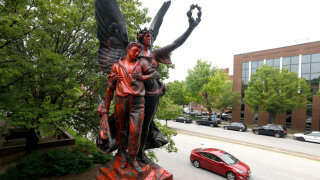