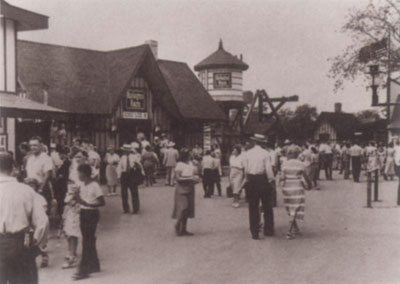 The Chicago Railroad Fair of 1948 and 1949 was a public celebration of the heritage and rebirth of American railroading.
California State Railroad Museum

Held on the lakeshore site of the 1934 Century of Progress Exposition (where Burlington's brand-new Zephyr had made a dramatic entrance at the conclusion of a non-stop sprint from Denver), the Chicago Railroad Fair was testimony to the lingering centrality of trains in the public mind in the immediate postwar years.

The fair celebrated the centennial of railroading's arrival in Chicago. Thirty-seven railroads participated, from the Atchison, Topeka & Santa Fe to the Wabash. Highlights included exhibits of locomotives and cars, a chance to ride behind steam on the narrow-gauge "Dead-wood Central," and various theme-park-type attractions, such as an Indian village sponsored by Santa Fe.

The centerpiece was the "Wheels a-Rolling" pageant, presented in a dozen scenes. Though Scene One chronicled the National Road, Pony Express, Overland Trail, and early "horseless carriages," trains took center stage as the pageant recreated the Golden Spike ceremony and other important events in railroad history, at the same time paying homage to the Harvey Houses, the Pioneer Zephyr, and other icons of railroad lore.

The closing scene included automobiles and trucks. Had they known what the future held, the railroads might not have been so magnanimous.

Read more about the history of railroads in these articles: