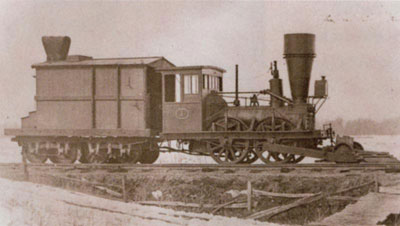 Arriving from England in 1831, the "John Bull" was modified substantially to make it better suited to American conditions.
Railroad Museum of Pennsylvania

In 1980, John H. White, Jr., and his colleagues at the Smithsonian Institution pondered how to mark the 150th anniversary of the locomotive "John Bull." Dare they carefully steam up and actually operate the oldest locomotive in America? After all, it did spend 35 years in rough railroad service, and the best way to learn how machinery actually worked is to operate it. There were risks, but much to be learned in the process.

The firm of Robert Stephenson in England constructed the locomotive for the Camden and Amboy Railroad and delivered it in August of 1831. By 1866, the "John Bull" was out of service-but the railroad recognized its historic importance and preserved it intact. After the Pennsylvania Railroad absorbed the C&A in 1871, it exhibited the "John Bull" at various expositions and in 1885 presented the locomotive to the Smithsonian Institution.

Almost a hundred years later, Smithsonian staff and volunteers completely disassembled and inspected the ancient engine. After many tests and lots of tender care, the "John Bull" steamed again, hauling its companion passenger car over branch lines near Washington, D.C. Over a period of several weeks in the fall of 1981, the locomotive taught its keepers more about early steam power than any textbook possibly could. It looked, smelled, sounded, and behaved exactly like the thousands of steam locomotives that followed it -- to the delight of curators and rail fans alike.

Most of the 75,000 streetcars running around the United States in the 1920s were old and tired, and it seemed the way to revitalize the industry was to design a new type of streetcar-one that would replace the boxy and rattling old traditional streetcars and bring the image of modern comfort and design to the street railroad industry.

A planning group formed late in 1929 to study the problem. Representatives of railroads and the manufacturing industry collaborated to evaluate everything about the streetcar, from controllers and brakes to the shape of seats and exterior appearance. Their new design, named the PCC (after the President's Conference Committee) Car, was modern in appearance and featured innovations that made it lighter, smoother riding, more comfortable, and more durable than earlier cars.

The first was placed in service in Brooklyn during early 1936, and lines in Baltimore and Chicago soon placed orders. Almost 5,000 PCC cars were built, most of them ending up in perhaps 30 cities across North America.

The PCC did not save the street railroad industry, but it helped slow the inevitable decline. The PCC car's durability and relatively low maintenance cost allowed several transit operations to survive during the postwar period, and these venerable streetcars can still be seen serving transit riders in Philadelphia, Boston, Pittsburgh, Newark, and Toronto. 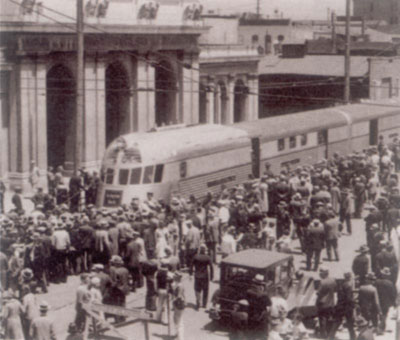 In January of 1968, the Atchison, Topeka & Santa Fe caught the attention of the trade press (and shippers) with the inauguration of the Super C-a 40-hour piggyback and container train on the 2,200-mile route between Chicago and Los Angeles. This six-days-a-week service was as fast as the Super Chief-hence the name; average speed was more than 55 miles an hour, topping out at 79.

Trains were light. No more than about 20 cars were projected, though in reality they would often run with as few as two or three. As originally conceived, the trains were a straight shot-no classification, no pick-up or drop-off. There were, however, 17 crew changes en route, an indication of the antediluvian nature of the work rules at that time.

Naturally, the Super C was a premium-price service, costing about double the usual COFC/TOFC rates, in fact. Because of the high cost, the train had some difficulty attracting a steady clientele. The operation's purity was further compromised by the addition of a Kansas City pickup, as well as combinations with trains west of Barstow, California.

At the same time, Northern Pacific was fielding a similar service on the 1,875-mile Seattle-Minneapolis Tokyo Express, which averaged 51 miles per hour and was thus faster than the North Coast Limited, NP's premier passenger train. Neither this train nor the Super C would linger for long, but they proved how quickly inter-modal freight could move by rail.

The CZ's death was slow, painful, and public. Western Pacific, the weakest of its three operators, was the first to go to the I.C.C. to ask out-in September of 1966. The Commission was on the horns of a dilemma, since the line was clearly demonstrating significant losses, yet the train was running full in summer, with a year-round load factor of 78 percent.

Furthermore, a survey showed a 95 percent approval rating by passengers. Although Rio Grande claimed losses, it still stood firm with pro-passenger Burlington in supporting the train. The I.C.C. deliberated for five months, then ordered Western Pacific to run the train for another year.

WP was back, hat in hand, as that term expired, only to be rebuffed again by the I.C.C., which felt that the railroad was only half-heartedly trying to improve the train's faltering balance sheet.

Then, in May of 1969, the Rio Grande asked to discontinue its portion of the run, citing annual losses of almost $2 million. By now, passengers were finally beginning to desert the CZ, disillusioned by poor timekeeping, deteriorating equipment, and years of discontinuation notices. The end came in February of 1970, when the I.C.C. ruled that the WP could end its segment, with Rio Grande dropping back to tri-weekly runs, connecting at Salt Lake City with Southern Pacific service to San Francisco.

The California Zephyr made its last run just over a month later.

As Amtrak went about saving the American passenger train in the 1970s, the corporation instituted significant changes. One that was distinctly two-edged, however, was the standardization of richly varied ancestors into look-alike trains.

One colorful exception was the Adirondack, a day train between New York and Montreal that was funded in part by the State of New York under a provision of the Amtrak Act that allowed states to mandate service by funding a percentage of the cost-two-thirds originally, later one-half.

The Delaware & Hudson was a willing operator of this train between Albany and Montreal-a wonderfully scenic ride, much of it along the shore of Lake Champlain-but on its terms, which were that the equipment used would be its own, refurbished at state expense and painted in a fetching blue, yellow, and gray. The locomotives would be four distinctive Alco PAs, handsome locomotives that D&H had purchased from Santa Fe in 1967 for service on the Laurentian and Montreal Limited.

Because D&H under Carl B. Sterzing, its feisty young president, wanted its identity front and center, Sterzing and Amtrak struck sparks virtually from the time of the train's inauguration on August 5, 1974.

After the leased CP domes were returned, Amtrak provided dome coaches in their stead, which D&H painted in its own colors, outraging Amtrak officials. Amtrak's blue and red promptly returned, and the passenger corporation played its trump card in this identity battle in 1977 by bumping the D&H equipment entirely with Turboliner trainsets.

The United States never embraced railroad electrification in a big way. Distances were generally too great and traffic densities too low for electrification's expensive infrastructure to make sense. The Pennsylvania Railroad's multi-track main line between New York and Washington was a dramatic exception.

By 1934, Pennsylvania had developed the locomotive that would become the operation's mainstay for almost half a century-the mighty GG1. The prototype, No. 4800, was cloaked in a somewhat ungainly, riveted shell. Fledgling industrial designer Raymond Loewy was given the important assignment of turning this proverbial ugly duckling into a swan.

The result was a shiny dark green carbody tricked out with five elegant gold pinstripes that plunged to vanishing points on the locomotive's shapely nose. Small red keystones provided discreet splashes of color. One hundred and thirty-nine GG1s were built.

By the 1970s the GG1s were aging; though still able to outhaul anything in sight, their days were numbered. To provide a fitting finale, a group called "Friends of the GG1" restored one of Amtrak's "Gs" to its original pinstripe scheme. On May 15, 1977, GG1 No. 4935 was rededicated at Washington Union Station and put back into service.

Four years later, the Jersey Central Railway Historical Society and NJ Transit restored GG1 No. 4877 to glorious Loewy pinstripes-but in this case in Tuscan red (worn by a handful of Gs in the fifties). Like No. 4935, 4877 entered regular service and was on hand for the bittersweet ceremony on October 29, 1983, when the last active GG1 was retired from service on Transit's North Jersey Coast Line.