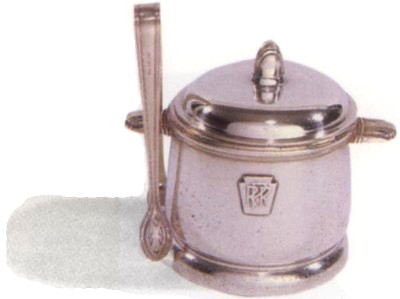 Every dining car on the Pennsylvania Railroad carried sugar bowls like this one in the 1930s.
John B. Corns

The Pennsylvania Railroad began to experiment with electrification in 1895 and by 1906 had electrified its Long Island Railroad and West Jersey & Seashore Railroad subsidiaries. Electric power pulled as many as 1,000 trains a day under the Hudson River to New York City's Pennsylvania Station, opened in 1910. Suburban lines around Philadelphia were electrified before World War I, and there was serious discussion about adopting electric power for mainline freight and passenger trains.

A number of steam railroads tried electric traction during this period. The technology was new and intriguing, and electric locomotives promised operating advantages over steam locomotives. They were faster, easier on track, cost only one-third as much to maintain, would last twice as long, could run in either direction, and never had to be removed from service for monthly boiler washes. Electricity also eliminated smoke and cinders, fuel and water stops, roundhouses, and turntables.

The Baltimore & Ohio, New Haven, New York Central, Boston & Maine, Milwaukee, Great Northern, Virginian, and Norfolk & Western railroads all developed substantial mainline electrification projects, but the Pennsylvania's plan was to be the biggest of them all. In late 1928, the railroad announced its intent to electrify 1,300 miles of track over the 325-mile route between New York City and Wilmington, Delaware. This ambitious scheme was expanded a year later with a plan to extend the electrified territory past Washington, D.C., to Potomac Yard north of Alexandria, Virginia.

The B&O logo featuring the nation's capitol dome was first developed in the 1890s as an appeal to the patriotic fervor of Americans wishing to see Washington, D.C. This version of the company icon highlighted the services of the newly air-conditioned Capitol Limited of 1934.
Hans Halberstadt

The timing of this second announcement coincided with the start of the Great Depression. There were serious concerns about the wisdom of attempting such a project in the face of the national economic collapse, but the Pennsylvania saw great future benefits from electrification and decided to continue. The railroad had sufficient capital resources to get work under way and carry the project through 1931, when financing for any railroad project -- even the "Standard Railroad of the World" -- dried up. A $27.5 million loan was received from the Reconstruction Finance Corporation to continue the work. Another loan, for $80 million, was provided by the Public Works Administration to finance the Washington, D.C., section.

The great project was complete by 1940, giving the Pennsylvania Railroad the largest -- and the last-electrified common -- carrier mainline railroad in the nation. The result was a 20 percent increase in operating efficiency, which would pay substantial dividends during World War II, when traffic on the electrified lines reached an all-time high.