Streamliners During the Depression 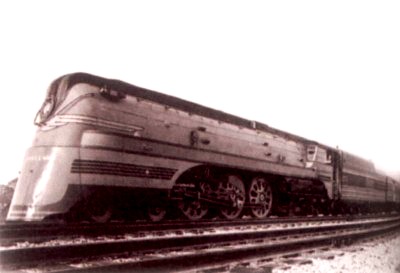 The Milwaukee road's crack Hiawatha trains were homegrown streamliners. The cowling on the locomotive suggested speed and made it resemble a diesel locomotive. These trains routinely hit 100 mph.
Railroad Museum of Pennsylvania

During the 1920s, some railroad designers became conscious of the developing public interest in the automobile and the fledgling commercial aviation industry. They sought to make the American railroad more contemporary, looking to modern, design-inspired trains in Europe as examples. Otto Kuhler took it upon himself to modernize the steam locomotive, and he published drawings in 1928 that resulted in his appointment as an industrial designer for the American Locomotive Company.

By the early 1930s, a competition was under way among the railroads and carbuilders to discover the best -- and most marketable -- way to combine the technical innovations of streamlining, internal combustion power, and lightweight construction. Over the next few years, a series of streamlined and air-conditioned motor trains were produced to test and demonstrate these concepts.

First of the new "streamliners" was the Union Pacific's Pullman-built M-10000, announced in 1933. Made entirely of aluminum alloy, its three articulated cars weighed less than a single conventional sleeping car and could accommodate 110 passengers. Powered by distillate -- a low-grade petroleum fuel -- the train was inaugurated in February 1934 as a harbinger of things to come.

The Budd Company of Philadelphia produced the Zephyr for the Chicago, Burlington & Quincy two months later. The Zephyr's engine was fueled with diesel oil, which proved to be much superior to distillate and established the pattern for subsequent diesel-electric locomotives. Pullman built another motor train in 1936 for the Illinois Central's St. Louis -Chicago Green Diamond, and others for Union Pacific, while Budd began producing streamliners for the Burlington line.

The Union Pacific christened its trains the Cities, while the Burlington had various kinds of Zephyrs, Trains like the City of Portland and the Twin Zephyrs influenced public attitudes about passenger travel, creating a demand for even more comfortable and flexible streamline service.

Although striking in appearance, articulated motor trains had serious limitations. The cars were permanently coupled together, making it extremely difficult to adjust capacity in order to meet demand. If the power car needed repair, the entire train was out of service, and the great length of some trains taxed yards and terminal facilities. The solution was to apply the materials and construction techniques used in the motor trains to individual locomotive-hauled cars.

Pullman built a pair of aluminum observation cars in 1933, and the Milwaukee Road started to build lightweight coaches the next year. Budd turned away from articulated motor trains in 1936 and began to produce individual cars to its distinctive fluted stainless-steel design. Aluminum and lightweight high-tensile-strength steel alloys allowed the new cars to weigh as little as 37 tons -- although 50 tons was more customary -- compared with 85 tons or more for conventional, or "heavyweight," cars. The new cars could be pulled by conventional locomotives and offered greater adaptability than the motor trains, while effecting a considerable weight savings over conventional equipment.

Integral to the lightweight car concept was mechanical air conditioning and air circulation. No more would the comfort of passengers be dependent on outside air temperature, and cinders were permanently banished from clothes and bedding.

Railroads that were reluctant to invest in motor trains saw potential in the new lightweight cars, and it wasn't long before they began to plan new, high-capacity streamline trains. Many of these would be pulled by diesel-electric locomotives, marking a nearly complete break with the tradition of heavyweight cars being pulled by steam locomotives.

Pullman-Standard, Budd, and American Car & Foundry were the principal commercial builders of new cars. Seeking less costly alternatives, some railroads rebuilt older cars in the streamline style or constructed their own lightweight equipment. The, Milwaukee Road built distinctive lightweight cars in the Milwaukee Shops and in May 1935 introduced the Hiawatha, the first steam-powered streamliner, which it preferred to call a "speed-liner." Not to be outdone, the Baltimore & Ohio "streamstyled" heavyweight cars for its 1938 Capitol Limited.

New cars and streamlined diesel-electric locomotives transformed the passenger train and established new standards for passenger comfort and amenities. The great names of the early streamline era still resonate: the Coast Daylight, the Rocky Mountain Rocket, the City of San Francisco and City of Los Angeles, the Hiawatha, the 400, and dozens more. First-class "name" trains captured the public imagination.