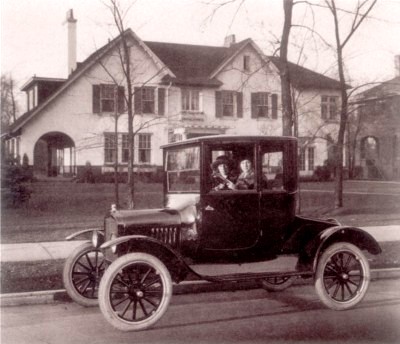 The vehicle that changed the thought and transportation patterns of Americans as surely as railroads had altered personal travel in the 1830s was the Ford Model T. Inexpensive and trustworthy, coupes like this 1919 model allowed travelers to go wherever and whenever they pleased.
Ford Motor Company

The Santa Fe Railway suffers the worst traffic losses in its history as the Midwest is transformed by drought into a "Dust Bowl."

In May, B&O's Columbian, the first completely air-conditioned passenger train, is put into service between New York and Washington.

Depression-era hardship causes industry leaders to lower railroad wages by 10 percent for one year. Despite that concession, the net income of railroads plummets to a loss of $122 million.

Roosevelt is inaugurated: He promises quick recovery as the United States enters "The 100 Days."

Union Pacific's M-10000 streamliner does a coast-to-coast run in 57 hours.

The Railroad Retirement Act of 1934 is declared unconstitutional.

The streamlined Challenger, running between Omaha and Los Angeles, introduces such luxuries as air-conditioning, free pillows, and attendants trained as nurses.

In September, a war emergency is declared in the United States.­