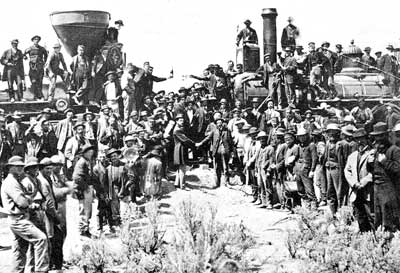 The ceremony for the driving of the golden spike at Promontory Summit, Utah
Public domain image

With today's jets taking us across the United States in just six or seven hours, it is very hard to imagine travel in the mid-1800s. Let's just say it was arduous. Getting from New York to California in 1860 could be a half-year affair involving a number of different trains to get to the Mississippi River, and then horse-drawn wagons across the plains and over the mountains. The journey was fraught with peril -- everything from Indians to weather to robbers to wild animals could cause insurmountable problems.

So when they put the "golden spike" into the last piece of track of the Transcontinental Railroad on May 10, 1869, it seemed like a miracle. There was an electric reaction to the news all across the country. Finally you could imagine going from New York to California in a week rather than six months, and the risks fell significantly as well.

The whole idea of building the Transcontinental Railroad moved from fantasy to reality during the administration of Abraham Lincoln. Lots of federal dollars went into this project starting in 1862 with the Pacific Railway Act. The whole project stretched from Omaha, Nebraska to Sacramento, California over 1,800 miles of track. It took about six years to build the Transcontinental Railroad and the golden spike was hammered into the ground on May 10, 1869. Then, in 1872, a bridge across the Missouri River gave the U.S. a single line of track running from coast to coast. By 1876, a train had run from NY to California in less than 90 hours.

The technology needed to build the railroad was impressive for the time. Workers had to assemble wooden trestle bridges, blast tunnels through mountains, grade hundreds of miles of track bed and actually lay the crossties and track. And don't forget the logistics of moving so much equipment, people, food, tools, metal and wood to a construction site hundreds of miles away. There was a point where the construction teams had become so efficient that they could lay 10 miles of track in one day. The development of all that technology, along with the existence of the backbone track, caused a railway explosion. Over 100,000 miles of track was laid across the United States, in the next 20 years.

It took nearly a century to find the modern replacement for the railroads. In 1959, American Airlines offered the nation its first regular jet service flying non-stop across the country on 707s.

For more information about the Transcontinental Railroad and related topics, check out these links: