by Mark Mancini Feb 11, 2019
Hundreds of explorers tried to locate the Northwest Passage, the polar sea route that links the Atlantic Ocean to the Pacific. Many attempts ended badly. Photos.com/Getty Images

The Arctic and the Antarctic were two of the world's last frontiers. Some thought Biblical giants stalked the North Pole. Other beliefs were even more fantastic: An 1885 book written by the president of Boston College claimed that the Arctic was the "cradle of the human race" because way back in ancient times, mankind was supposedly created up there.

To learn the truth about the poles, expeditions were organized by global superpowers and financial titans. It was a dangerous business. Tragedy often befell those brave souls who ventured into the frozen unknown, fighting the furious elements in pursuit of scientific knowledge, national glory or lucrative trade routes. From freezing diarists to vanishing ships, here are five chilling tales of disaster and strife in polar exploration.

In the Age of Sail, there was no Panama Canal. Desperate to find a shortcut to China and India, European trade interests set their eyes on the Arctic. Hundreds of explorers tried to locate the Northwest Passage, the polar sea route that links the Atlantic Ocean to the Pacific. Many attempts ended badly.

One of those began on May 19, 1845, when Sir John Franklin of the British Royal Navy set out to find and cross the passage. That day, he left Greenhithe, England, with two ships under his command: The HMS Erebus and the HMS Terror. Altogether there were 129 officers and sailors divided between these vessels. None of them made it out of the Arctic alive.

Salvaged documents from their doomed voyage tell us Franklin died in June 1847, two years after he left England. We also know the ships became frozen in place near the McClintock Channel for a considerable period of time — and malnutrition and scurvy were probably rampant among the crew. Despite all this, some of the men were still alive in April 1848.

Three crewmen were buried at Beechey Island in far north Canada. Other bodies and artifacts from the expedition — including bones that show evidence of cannibalism — have been found elsewhere in the region. The vessels themselves stayed hidden for more than 160 years. Archaeologists finally located the wrecks of Erebus and Terror at the bottom of the Queen Maud Gulf in 2014 and 2016, respectively.

Learn more about the Franklin expedition in "Relics of the Franklin Expedition: Discovering Artifacts from the Doomed Arctic Voyage of 1845" by Garth Walpole (Author), Russell Potter (Editor). HowStuffWorks picks related titles based on books we think you'll like. Should you choose to buy one, we'll receive a portion of the sale.

For 21 straight months, the USS Jeannette was trapped. She'd left San Francisco on July 8, 1879, with her 33-man crew. Financed by newspaper tycoon Gordon Bennett Jr. and overseen by the U.S. Navy, the adventurers hoped to become the first people in recorded history to visit the North Pole.

But that September, the Jeannette was caught in a block of drifting sea ice. She remained stuck until June 12, 1881, when — having been slowly crushed by the frozen water — the vessel sank.

Stranded about 497 miles (800 kilometers) north of the Siberian mainland, the crew began their long journey home. Twenty members of their party died en route, including George Washington De Long, the Jeannette's captain. The survivors were able to find rescue after some of them made it to the Russian settlement of North Bulun. Though they'd failed to reach the North Pole, the Jeannette explorers did discover some new Arctic islands, one of which they named after Bennett.

Learn more about the Jeannette expedition in "Rough Weather All Day: An Account of the Jeannette Search Expedition" by David Hirzel. HowStuffWorks picks related titles based on books we think you'll like. Should you choose to buy one, we'll receive a portion of the sale.

Millionaire William Ziegler sponsored another American mission to the North Pole that launched in 1901. The campaign was a bust: Ziegler's team returned in 1902 after its leader cut the journey short. But on the bright side, the trip produced some wonderful motion picture footage. It was shot by cameraman Anthony Fiala, whom Ziegler put in charge of a second North Pole expedition in 1903.

Fiala and 38 subordinates reached Rudolf Island up in the Barents Sea — only to see pack ice destroy their ship. Stranded above the Arctic Circle, the team spent two years waiting to be rescued. To survive, the men ate polar bears, walruses and hordes of other game animals while burning coal they'd found on the island. The Terra Nova whaler ship eventually came and rescued the crew in 1905. Despite everything they'd suffered through, only one of Fiala's crewmembers had died by the time the Terra Nova found them.

Learn more about the Fiala-Ziegler expedition in "The Ziegler Polar Expedition 1903-1905 Scientific Results Anthony Fiala, Commander" by William; John A. Fleming (ed.) Peters (Author). HowStuffWorks picks related titles based on books we think you'll like. Should you choose to buy one, we'll receive a portion of the sale.

There's some uncertainty about who reached the North Pole first. But the Neil Armstrong of South Pole exploration was undoubtedly Roald Amundsen. A veteran Norwegian explorer, Amundsen became the first man to set foot on the South Pole when he arrived there on Dec. 14, 1912, with his sled dog-propelled team.

Amundsen and his team won a 99-day race. While the Norwegians slogged across Antarctica, they were pursued by the British Navy captain Robert Falcon Scott. On Nov. 1, 1911, Scott and an initial party of 14 men left their coastal base camp on Ross Island. From there, they headed inland.

(Incidentally, the ship that took Scott to Antarctica in the first place was none other than the Terra Nova, Anthony FIala's rescue vessel.)

Most of Scott's companions broke away and went back to Ross Island; only four men were still with him when he finally arrived at the South Pole on Jan. 17, 1912. Amundsen had beaten the Brits by more than a month. And the worst was yet to come. One by one, Scott and his four colleagues perished on their return trip. The captain's recovered diary is a grim testament to their fate.

Learn more about the Terra Nova expedition in "With Scott to the Pole: The Terra Nova Expedition 1910-1913" by Herbert G. Ponting. HowStuffWorks picks related titles based on books we think you'll like. Should you choose to buy one, we'll receive a portion of the sale.

Scientifically, this trip was a success. Expedition leader Douglas Mawson and his companions mapped out little-known terrain, discovered new species and found the first Antarctic meteorite.

But one portion of the expedition was marred by suffering and death. Wanting to survey an especially remote part of Antarctica, Mawson left the base camp at Commonwealth Bay on Nov. 10, 1912, with two colleagues and 16 huskies. Then on Dec. 14, when they were all 310 miles (500 kilometers) away from camp, one of the men fell into a crevasse and died. His sledge went down with him, as did most of the team's food supply.

To survive, Mawson and his other colleague had to eat their own dogs. Alas, the other man soon died as well. Traveling alone, Mawson walked for 32 days and more than 100 miles (160 kilometers) of Antarctic wasteland. En route, the soles of his feet fell off. Mawson arrived back to the base camp area just in time to watch an Australia-bound ship sailing away. He was forced to stay in Antarctica for another winter with a contingent of expedition members who were waiting for him.

NOW THAT'S INTERESTING
In 1913 and 1914 — years after his Arctic snafu — Anthony Fiala tagged along with former U.S. president Theodore Roosevelt on an expedition through the Amazon. 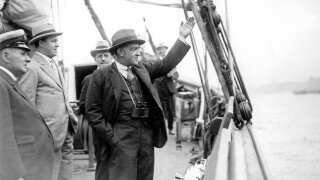 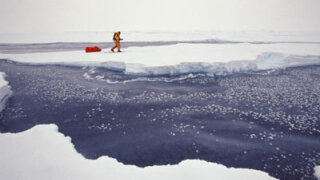 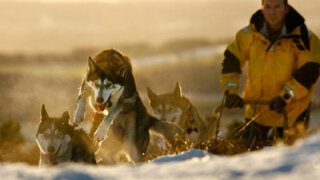