Browse the article How the March on Washington Worked 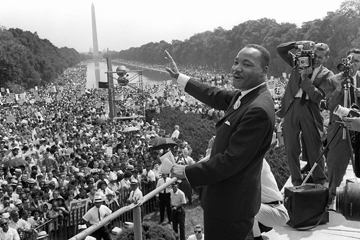 Martin Luther King Jr. waves to supporters from the steps of the Lincoln Memorial during the famous March on Washington in 1963. See more pictures from civil rights history .
AFP/Getty Images

The National Mall is packed with people, most wearing dresses or slacks and ties despite the late-summer heat. For hours, passionate, heartfelt songs and speeches fill the air. Then, finally, those unforgettable words ring out: "I have a dream ... "

These are the images many of us have of the 1963 March on Washington, whether we were alive at the time or not. The most vivid is that of Dr. Martin Luther King Jr.'s "I Have a Dream" speech. But King's speech, while well received, wasn't an immediate sensation. Nor was the march only about civil rights [source: Erickson].

The 1963 event was officially dubbed the March on Washington for Jobs and Freedom. Its main aims were racial equality and full employment for blacks and whites. Unemployment was rising then, especially among minorities. And although there had been several major pushes for equal rights over the last decade, little progress had been made. By 1962, civil rights legislation (to prohibit discrimination on the basis of race, color, creed, religion or sex) was stalled in Congress, and U.S. President John F. Kennedy was unwilling to lend any help [sources: Erickson, Penrice].

Frustrated, civil rights activist A. Philip Randolph proposed a march on Washington to demand equal rights and jobs for all. But the response from mainstream civil rights organizations was tepid [source: Penrice]. Then King signed on. Suddenly, the idea began to pick up steam. Civil rights groups that often disagreed with each other banded together -- the National Association for the Advancement of Colored People (NAACP), the National Urban League, the Conference of Racial Equality (CORE), the Student Nonviolent Coordinating Committee (SNCC) and King's Southern Christian Leadership Conference (SCLC).

In June 1963, a date was set: Aug. 28, 1963. The buzz was 100,000 would attend, mainly blacks. Many people became unnerved. Mainstream media wondered if the march would devolve into a riot. President Kennedy asked organizers to call off the march, but they refused. So to help ensure public safety, liquor stores and bars were shuttered that day. Stores hid or moved their valuable items. Federal employees were given the day off. And innumerable military personnel were on standby [source: Penrice].

Roughly 250,000 crammed into the National Mall. Most were black, but 10 to 20 percent were white [source: Erickson]. The group peacefully walked down Constitution and Independence avenues, then gathered at the Lincoln Memorial to hear speeches, songs and prayers. After King's speech -- the final event -- organizers and civil rights leaders met with President Kennedy and Vice President Lyndon B. Johnson in the White House. In 1964, Congress passed the Civil Rights Act, followed by the Voting Rights Acts of 1965 [source: Hendrix].

The Civil Rights Act desegregated public schools and public accommodations like hotels and theaters, outlawed discrimination in hiring and prohibited unequal application of voter registration requirements [source: The Dirksen Center]. The Voting Rights Act barred state and local governments from imposing any qualifications to voting (for instance, literacy tests) or denying anyone the right to vote because of race [source: Our Documents]. The March on Washington is credited with helping get these acts passed, though the process was not smooth sailing.

And coordinating the massive, multifaceted march took the talents of two unsung heroes. 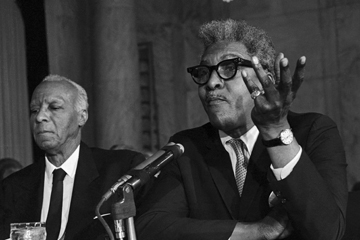 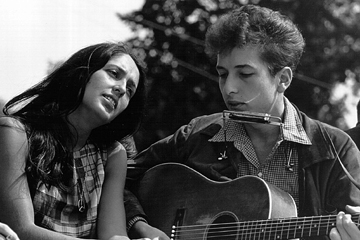 Perhaps surprisingly, some of the march's most vocal dissidents were black, namely Stokely Carmichael and Malcolm X. Carmichael was a civil rights activist and late the leader of SNCC. But over time he moved away from King's theory of nonviolence and toward one of self-defense; he also coined the "black power" slogan. The March on Washington, in Carmichael's view, was "only a sanitized, middle-class version of the real black movement," so he refused to attend [sources: History, The National Archives, Penrice]. Black nationalist leader and Nation of Islam spokesman Malcolm X bitterly referred to the event as "The Farce on Washington" and discouraged fellow Nation of Islam members from attending. Curiously, he himself attended Stanford, Penrice, Biography].

The "I Have a Dream" Speech

The best-known moment of the March on Washington was King's "I Have a Dream Speech" which says in part: "I have a dream that my four little children will one day live in a nation where they will not be judged by the color of their skin but by the content of their character."

But that part was not scripted in advance. The main thrust of the speech was actually the "bad check" – that the architects of the Republic had signed a promissory note guaranteeing all its citizens life, liberty and the pursuit of happiness and had defaulted on that note as far as African-Americans were concerned. King stated, "Instead of honoring this sacred obligation, America has given the Negro people a bad check, a check which has come back marked 'insufficient funds.'

"But we refuse to believe that the bank of justice is bankrupt. We refuse to believe that there are insufficient funds in the great vaults of opportunity of this nation. And so, we've come to cash this check, a check that will give us upon demand the riches of freedom and the security of justice." King went on to demand that civil rights and voting rights be given to blacks.

As the speech was winding down, Mahalia Jackson, a close friend of King's, felt it needed to go in a different direction. So she shouted to him from behind the podium, "Tell them about the dream, Martin!" And he did, improvising that well-loved section from speeches and sermons he had given in the past [source: History].

Interestingly, Life magazine did not put King on the cover of its next issue, but rather A. Philip Randolph and Bayard Rustin. The speech grew in stature after King's assassination and efforts to have his birthday declared a national holiday [source: Democracy Now].

After the March on Washington, civil rights leaders met with Kennedy and Johnson to press their case. In late October, Kennedy called on Congress to have the votes lined up to pass the Civil Rights Act. But that did not happen. Kennedy was assassinated in November. In 1964, President Lyndon Johnson shepherded the bill through Congress, calling it a fitting tribute to the late Kennedy [source: UPI].

Fifty years on, official segregation in the U.S. is long-gone. Life has improved for African-Americans: 28 percent live in poverty, versus 42 percent in the 1960s, but unemployment for blacks remains higher and household income remains lower than for whites [source: Wessel]. Many Americans are disillusioned by a recent spate of racially charged events, such as the trial of George Zimmerman, charged with shooting and killing unarmed African-American teen Trayvon Martin, and the Supreme Court's decision to strike down a key provision in the Voting Rights Act, thus allowing states to change their election laws without advance federal approval [sources: Bello, Liptak].

But the gains of the March on Washington live on. The overall themes of justice, equality and freedom continue to resonate with people all over the world and inspire other struggles for human rights.

The New March on Washington

Author's Note: How the March on Washington Worked

I was a baby during the March on Washington, so I don't remember this historic event. Still, it was so powerful that when I studied it over the ensuing decades as a young student and then as a communications major, it never ceased to inspire me.