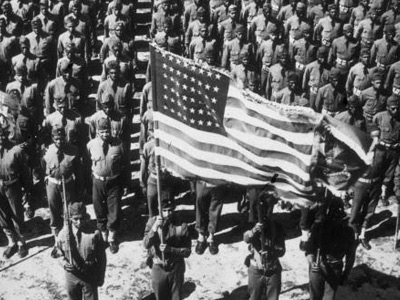 During World War II, the U.S. military was racially segregated. The bravery and valor of certain African-American soldiers and squadrons helped change this, however.
Hulton Archive/Getty Images

It's difficult to find the silver lining in crisis situations, especially ones as massive and tragic as World War II and the Holocaust. But in the context of civil rights, these tragedies were just the shot in the arm that the United States needed to call attention to an important issue.

In the 1930s, the Nazi party rose to power in Germany and began to enforce racist policies on the basis of their philosophy of racial hygiene. Through forced sterilization and attempted genocide, the Nazis wanted to cleanse the nation of what they considered lesser races in an effort to strengthen and generally promote the "improvement" of humankind. While the world watched in horror to see where racism could lead, Americans were encouraged to take a closer look at the racial discrimination inside their own borders.

By 1941, when the United States was increasing production for the war abroad, the insatiable demand for workers helped to dissolve the lines of segregation that kept African-Americans and whites separate. Under pressure from African-American civil rights leaders, President Franklin D. Roosevelt issued Executive Order 8802, which banned discrimination in industries with federal contracts. As a result, many African-Americans suffering under the oppressive Jim Crow laws in the South moved where the jobs were -- Northern and Western cities such as Detroit, Los Angeles and Seattle. While discrimination was still present in these areas, it was less severe. African-American groups gained a sense of empowerment through exercising new freedoms and privileges not common in the South [source: Packard].

In December 1941, the United States was pulled into the war after the Japanese attacked Pearl Harbor. During this battle, the valor of one African-American took the spotlight. Doris Miller was a cook aboard the USS West Virginia when he disobeyed an order to abandon ship. Instead, he manned a 50-caliber anti-aircraft machine gun and, despite not having any training in the weapon, started firing and successfully shot down a few Japanese planes.

African-Americans fought in every branch of the military during World War II. But throughout the war, the U.S. armed forces remained segregated. It took a groundbreaking executive order after the war to change that. Historians credit figures like Miller for calling people's attention to the injustice of the military segregation policies. In particular, one prominent African-American unit is known for its contribution to the war: the Tuskegee Airmen. 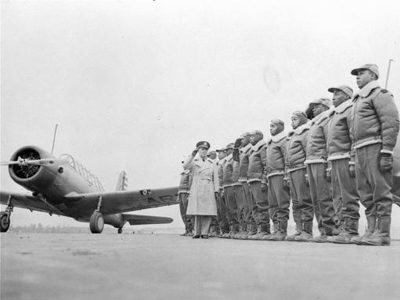 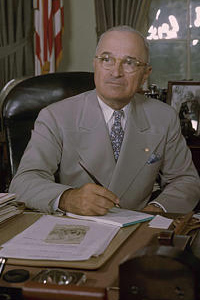