The peace sign was created as a logo for a nuclear disarmament march in the 1950s, but became the symbol of an entire generation. TheDigitalArtist/Needpix

If you have a can of spray paint and a giant rock face to paint on, and you need to tell a group of people a half a mile away that you come in peace, how would you get the message across? You could paint an olive branch or an origami crane, a white poppy or fingers making a V sign. But there's an easier way: Draw a circle, bisect it with a vertical line, and two lines pointing down at a 45 degree angle from that line, like two drooping arms.

This peace sign in one of the most recognized symbols in the modern world. In its relatively short history, it has become ubiquitous — it's on pajamas, jewelry, Frisbees and the floormats of cars — but it has also been used as an emblem of a variety of uniquely 20th century cultural and political movements, from the hippies to women's rights to environmental protection to the end of South African aparteid. But it was created for a very specific movement: nuclear disarmament.

The peace symbol we know and love today was created by Gerald Holtom, a British artist and activist who was a conscientious objector during World War II. During the late 1950s, some people in England were concerned about what they called "The Big Bomb" — the weapon they'd seen dropped on two Japanese cities during WWII, effectively ending the war, but killing hundreds of thousands of civilians in the process. But by 1958, three countries — the U.S., the Soviet Union and England — had begun to stockpile nuclear weapons.

The Direct Action Committee Against Nuclear War, a group of pacifists (and, let's face it, people who were concerned about a future in which one nation state could destroy another by dropping a handful of bombs) organized a march from Trafalgar Square in London to a facility where nuclear material was produced in Aldermaston, 52 miles (83 kilometers) away.

Holtom created a logo for the event: a circle circumscribing two characters from the flag semaphore alphabet, a type of optical telegraph used for pre-walkie-talkie communication since the 19th century: "N" for "Nuclear" (both flags at the signaler's side at 45 degree angles) and "D" for "Disarmament" (a straight vertical line with both flags pointing straight up). Holtom's goal was for the symbol to be bold, simple, easily reproduced and easily recognized — even on the grainy black-and-white television sets of the day. And because he wanted his work to do whatever the 1950s version of "going viral" was, he never copyrighted it, and hoped it would take off.

And boy, did it ever.

The Peace Sign Went Viral Before Viral Was a Thing

"The Vietnam War was just beginning in the early 60s," says Ken Kolsbun, author of "Peace: The Biography of a Symbol," which was published in 2008 on the 50th anniversary of the symbol.

The symbol was adopted as an anti-war symbol, and because Holtom intentionally made it free for anyone to use, it was passed out on buttons on college campuses throughout the war, and adopted by the hippie movement as a symbol of 1960s youth subculture.

"The early anti-war people were not hippies so much as pacifists, worried about the growing fatalities in the Vietnam War," says Kolsbun. "It morphed from a symbol that stood for nuclear disarmament to one that stood for peace."

Gerald Holtom died in 1985, and according to Kolsbun, who corresponded with him during the 1970s, Holtom asked that his tombstone depict the peace symbol he created, only with a twist:

"On his tombstone, he wanted the symbol inverted; in other words, instead of drooping arms, he wanted the arms of his peace symbol to be pointed upward," says Kolsbun. "In his mind, this symbolized the Tree of Life. In symbology, when a symbol points downward that means someone has died, so I think later in life, he realized he wanted it to point up like the Tree of Life, where mankind lives."

Unfortunately, Holtom's revised peace symbol didn't make it onto his tombstone, but the first iteration of his work has certainly made an impression on the world.

Of course, symbols are slippery: There have been plenty of emblems for one idea or system of thought that have had their meaning hijacked and changed by a political faction. For instance, the swastika is an ancient symbol that has been used in many parts of the world, from Scandinavia to India to the Americas — and the meaning is pretty wholesome in virtually all cases (except one, of course). In various traditions, it was a symbol for divinity, good fortune, the sun, well-being and rebirth — to the Buddhists, the swastika symbolized the footprints of the Buddha. Of course, in the 20s and 30s, it was adopted by Nazi Germany as its national symbol. As a result, when you see the swastika these days, it brings up very different feelings than it did for the thousands of years of human history that came before it.

"The peace symbol stands for the rights of many groups of people — it's a remarkable symbol," says Kolsbun. "We always have to stay alert to political factions picking up the symbol and changing the meaning. That would be very unfortunate."

Now That's Interesting
In 1958, only three nations had nuclear weapons. As of 2019, nine countries have them.

There's a Pooping Man in the Catalan Nativity Scene 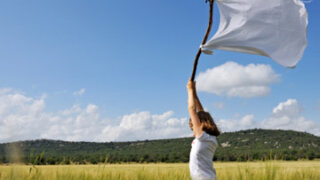 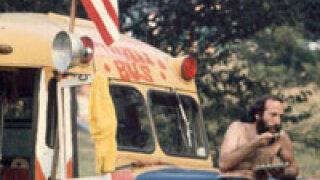 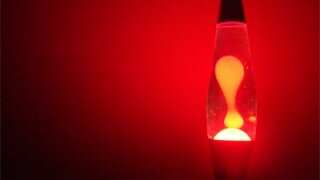