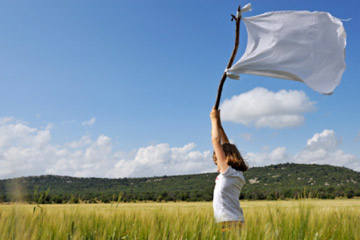 Everybody wishes for peace on Earth, but has it ever been a reality? See pictures of paradise.
Sami Sarkis/Getty Images

Whether it's the topic of a holiday greeting card or a beauty pageant question, peace on Earth is on almost everybody's wish list. But what does it mean to be peaceful? Does it mean friendly relations with other nations, getting good health care or living without fear of terrorist attacks? What about economic stability, or a government's nonviolent transfer of power? It's difficult to quantify what, exactly, adds up to a peaceful existence.

The Australian nonprofit group Vision of Humanity tries to do just that. Every year, it produces a list called the Global Peace Index, which ranks 144 nations according to how they stand on 23 different indicators of peace [source: Vision of Humanity]. Here are a few examples of these indicators:

Once all the data is compiled, the country with the lowest score is declared the most peaceful. In 2009, New Zealand was crowned the most peaceful country in the world, followed by Denmark, Norway, Iceland and Austria. The United States came in at number 83. While the U.S. scored well in areas such as United Nations financial support and civil conflict, the country falls short in several areas, including:

The country with the lowest score of the 2009 rankings is Iraq, with Afghanistan, Somalia, Israel and Sudan rounding out the bottom five.

Has there ever been peace on Earth? What are some of the most famous peaceful times in history? You might be surprised.

Probably the most publicized peaceful era is the Pax Romana. Latin for "Roman peace," this period of roughly 200 years was made famous by the 18th-century historian Edward Gibbon in his landmark book "The History of the Decline and Fall of the Roman Empire" [source: Encyclopædia Britannica Online].

Gibbon set the beginning of this time at 27 B.C., during the reign of Gaius Julius Caesar Augustus (otherwise known as Octavian, great-nephew and heir of Julius Caesar). Augustus set in motion a new brand of foreign policy for Rome, which had previously been focused on expanding the empire as much as possible. Instead of pushing an agenda of expansionism, Augustus advocated a shift toward prosperity and pacification within the borders of the empire. Civil rebellion fell dramatically during this time (though it didn't stop entirely). Ceremonies such as closing the Gates of Janus, which signaled the achievement of world peace, as well as the construction of the Ara Pacis ("Altar of Peace"), demonstrate the growing importance of a peaceful existence in the Roman Empire. Historians usually pinpoint the end of the Pax Romana in the year 180, when emperor Marcus Aurelius died and passed the throne to his son Commodus. Commodus didn't share all of his father's ideals and military philosophies, and thus the emphasis on peace went by the wayside.

But even though Augstus' overall intention seems to have been to maintain peace in the empire, there was still violence during the Pax Romana. Rebellions in Hispania (modern-day Spain and Portugal) didn't stop until roughly 19 B.C., and the border between Rome and Germania was hotly contested during much of the Pax. During this period, Rome invaded and annexed Britain -- not the most peaceful venture, particularly from Britain's point of view. So, even though the Roman Empire gets good press for the Pax Romana, it wasn't the most peaceful time in history.

For our next contender, let's head over to the steppes of Eurasia. Was peace another commodity on the Silk Road?

The Mongols: Fearsome Hordes, or Bringers of Peace? 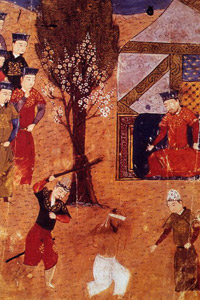 When his subjects weren't peaceful, Genghis Khan had them flogged. In this illustration, he watches on while someone else does the dirty work.
MPI/Getty Images

A thousand years after the Pax Romana, another era of international peace was established. Throughout the Eurasian continent, an empire arose that had advanced technology and a strong economy and protected thousands of miles of trade routes. In fact, it was this empire that enabled Marco Polo to travel by land from his home in Italy to China. Yes, believe it or not, it was the fearsome Genghis Khan, unifier of the Mongol hordes, who established the largest -- and one of the most peaceful -- kingdoms in history.

Today, we associate Genghis Khan and his successors with fearsome battle tactics and ruthless invasions. There's no question that his military strategies resulted in the deaths of countless people; by employing armies of archers on horseback, Genghis Khan was able to out-fight and outpace nearly any foe he encountered.

Within a matter of years, he'd taken control of the Mongol tribes, expanded their territory into an empire millions of square miles in area and managed the Silk Road trading route that linked Europe and Asia. At first glance, these accomplishments might not seem to indicate a peaceful time. But once the Mongolian empire was firmly established, life for its citizens seems to have actually improved.

One innovation the Mongols established was a postal system -- the first of its kind to connect the East and the West. The Mongolian government set up relay stations throughout their territories; each station was equipped with fresh horses and supplies and was maintained by the local population. This system allowed information to travel quickly and efficiently throughout the empire. Strict laws protected civilian property and travel; a famous legend purports that a woman could carry a sack of gold from one end of the empire to the other without fear of attack. Trade with other nations was very important to the Mongols, and that, too, was heavily guarded by law [source: New World Encyclopedia].

But do those innovations and prosperity outweigh the destruction wrought by the expansion of the Mongolian Empire? Enemies of the government were all but annihilated, and any internal resistance was dealt with in a swift and brutal manner. Even though the legacy of the Mongols is still evident today, they didn't establish the most peaceful era in history.

Now that we've eliminated the Romans and the Mongols, who's left?

Peace in Our Time

There's still another era to consider: the one we're living in right now. Certainly, there's no shortage of war around the world, not to mention famine, disease and economic struggle. However, some analysts believe that despite these shortcomings, the world as a whole is relatively more peaceful now than it ever has been before.

Evolutionary psychologist Steven Pinker believes that violence has declined sharply since the birth of the human race. When talking about violence, Pinker isn't just referring to war -- he also includes criminal punishment and murder rates, among other instances. Compared to our hunter-gatherer days, or the Middle Ages, our chances of dying by violent crime or as the result of war are miniscule [source: Zuckerman]. Pinker believes there are a few different reasons for this, all of which contribute to an overall more peaceful existence:

Cooperative alliances between countries, such as the United Nations and the European Union, also represent an increase in trust and good faith. Sharing military responsibility for international conflicts, implementing a common currency and establishing international tribunals all point to a desire for stability and peace. Vaccines and other medical innovations have improved our quality of life, and education is available to more people than ever before.

Despite all the drawbacks of modern living, we really are living in the most peaceful time in recorded history. But remember, it's all relative. Even more peaceful days may be yet to come.